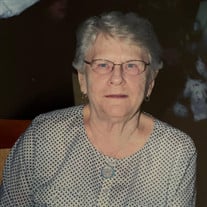 Alice Susie Guinn, 82, passed away peacefully in her home in Woodstock, Va., on Saturday Feb 12th, 2022. She spent her last days surrounded by her family. Alice was born in Olean NY and her family settled in Washington DC where she grew up. She met the love of her life, her late husband, Homer Wade Guinn Jr. They married and she became the wife of a military serviceman and they lived in many locations and enjoyed living in California the most before settling down in Maurertown, VA which she called home. Alice worked at Farmers & Merchants Bank in Woodstock & Edinburg as a loan officer. She made lifelong friendships while working there. She enjoyed working with so many wonderful friends she had made over the years, especially her secret society girls who often met up for dinner many years after. Alice loved traveling the most. After retirement Alice & Wade traveled across country in their motorhome and ventured to Canada with their friends from California to go fishing in Victoria. They enjoyed seeing most of this country and its national treasures. The past 10 yrs. she enjoyed traveling with her brother David and his wife Jerri from Canada to Mexico. She also loved spending time at the Jersey Shore and Atlantic city with her daughter and Dan who took her to see Bruce Springstein concert. She is survived by her three children, Homer Wade Guinn III (Mary Stuart), Robert Dale Guinn (Dianne Greenfield Guinn), and Susan Guinn (Daniel P. DeVenio); her four grandchildren, Jacqueline Pummel (CR Brooks), Samantha Lee and Alex Lee, Homer Wade Guinn IV, Hilary Ondo (Matt Lee Shenk); five great grandchildren, Nathaniel Pummel, Phillip Miller, Jackson Miller, Cash Lee, Vivian Lee and Tegan Guinn; her Brother David Lippert and his wife Jerri Lippert; and by her precious pets, Leo, Chico & Tazz. All who wish to pay their respects to Alice may visit Dellinger Funeral home in Woodstock on Tuesday Feb 15th 6-8pm. There will be a funeral service for those who feel comfortable attending at Dellinger’s at 12 noon on Wednesday, February 16, 2022, followed by a graveside service at Sunset View Memorial Gardens. The Pallbearers will be Daniel P. DeVenio, Troy McClanahan, Nathaniel Pummel, Clay Guinn, CR Brooks, Matt Shenk. The family is grateful for Blue Ridge Hospice during her final days. In lieu of flowers, please consider a donation to help veterans of the Woodstock American Legion building fund or Tower to Tower in Alice’s memory.

Alice Susie Guinn, 82, passed away peacefully in her home in Woodstock, Va., on Saturday Feb 12th, 2022. She spent her last days surrounded by her family. Alice was born in Olean NY and her family settled in Washington DC where she grew up. She... View Obituary & Service Information

The family of Alice "Susie" Guinn created this Life Tributes page to make it easy to share your memories.

Alice Susie Guinn, 82, passed away peacefully in her home in...

Send flowers to the Guinn family.