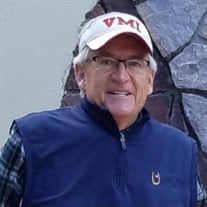 It is with heavy hearts to announce Andrew Lee “Andy” Dawson, age 67, of New Market, Virginia, died after a courageous battle with esophageal cancer on February 15, 2021 in his home surrounded by family. Andy is survived by his wife of 42 years, Catherine “Kitty” Dawson, his son Andrew and daughters Laura Beth (Sean) and Amy (Ray), 3 grandchildren Aidan, Henry and Jasper Harvey, and brother Robert “Bob” Dawson Jr. He is preceded in death by his father, Robert Dawson and his mother, Margaret Ashe Dawson. Andy was born on November 6, 1953 in Wytheville, Virginia. As a child his family moved often, including residences in Japan and Saipan, until they eventually settled down in Williamsburg, Virginia. Andy graduated from James Blair High School in 1971 and attended Campbell College from 1971 to 1973 in Buies Creek, North Carolina. Andy arrived in the Shenandoah Valley in 1977. He was the General Manager of the Best Western Mt. Jackson and Shenandoah Truck Stop. Andy wasn’t too fond of the Valley at first but soon met the love of his life, Kitty, and they married in 1978. After leaving Best Western in 1991, Andy served as the Executive Director of the Shenandoah Travel Association until 2000. From then on Andy was the General Manager at Office Products, Inc. in Harrisonburg, Virginia. His career and professional relationships were important to him. Devoted to the community, Andy was active in many local organizations. He served as President of the following: Mt. Jackson Chamber of Commerce, Mt. Jackson Lions Club, New Market/ Mt Jackson Little League, Virginia Travel Council and Shenvalee Men’s Club. Andy was also a member of the Board of Directors at the Virginia Hotel and Motel Association and Vice President of the Virginia Travel Council. Andy was elected and served as a Member of the Mt. Jackson Town Council from 1980 – 1988 and was elected and served on the Shenandoah County Board of Supervisors from 1995 - 2001. In his spare time Andy enjoyed playing golf at Shenvalee. He was always ready to bet on a match. He also enjoyed visiting the Carolina Beaches, listening to Motown Music, and RVing. His family will always remember him as a determined man who made no excuses. Andy was a loving husband, amazing father, and doting “granddaddy”. Artist Jesse Winchester wrote “I live on a big round ball, I never do dream I may fall, and even if one day I do, well, I’ll jump up and smile back at you.” Andy is smiling now and may he rest in peace. Arrangements are being handled by Dellinger Funeral Homes in New Market for a private graveside service. Memorial donations may be made to New Market Fire and Rescue Squad, 9771 S. Congress St., New Market, Va. 22844 or the New Market Library, PO Box 452, New Market, Va. 22844.

It is with heavy hearts to announce Andrew Lee &#8220;Andy&#8221; Dawson, age 67, of New Market, Virginia, died after a courageous battle with esophageal cancer on February 15, 2021 in his home surrounded by family. Andy is survived by his wife... View Obituary & Service Information

The family of Andrew Lee "Andy" Dawson created this Life Tributes page to make it easy to share your memories.

It is with heavy hearts to announce Andrew Lee “Andy” Dawson,...

Send flowers to the Dawson family.