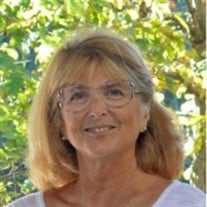 BARBARA ANN KNOWLTON GUSTAVSON, 65, of Woodstock, Virginia, died peacefully in her sleep at home on May 8, 2020, after living life to her fullest following a diagnosis of inflammatory breast cancer in October of 2016. Barbara was born in New Jersey on November 28, 1954.She was the second of three children. She met her husband, Dr. Steven Allen Gustavson, of Chatham, New Jersey, in her senior year of high school. Barbara graduated from Madison High School in 1972. She was an active member of the band, orchestra, twirling and musicals. She graduated from Rutgers – Douglass College in 1976, with a B.A. in Education/Mathematics. She also continued her passion in the Rutgers band. She married Steve on November 27, 1976 after her college graduation. Barbara began her professional career teaching high school Mathematics in New Jersey, Arkansas, Maryland, and Texas. She spent the majority of her professional career at Westat Research Corporation. where she advanced to the position of Associate Director. Upon their retirement, Barbara and Steve moved to Woodstock, Virginia. Barbara loved being with her family, as well as playing card games and reading. She and Steve were avid dancers in Couples Country Western and West Coast Swing. Since 2009, they were active members of a West Coast Swing competitive dance team. Barbara is survived by her husband, Steve, of Woodstock, Virginia; her daughters, Laura Caton and Kristen Zalenski, both of Stephens City, Virginia; her grandchildren Jackson Zalenski, Brianna Zalenski, and Riley Caton, all of Stephens City, Virginia; her siblings, William Knowlton and Jill Wince, both of Henrietta, Texas; her sons-in-law Nicholas Caton and Gregory Zalenski, both of Stephens City, Virginia; her sister-in-law, Julia Knowlton, of Henrietta, Texas; her brother-in-law, Aaron Wince, of Henrietta, Texas; her nieces, Diane Knowlton, of Henrietta, Texas and Andrea Knowlton, of Austin, Texas; and her nephew, Robert Wince, of Henrietta, Texas. She is predeceased by her father, Robert Ellsworth Knowlton (1921 – 1983) and her mother, Nadine Joyce Fischer Knowlton (1923 – 2011). Barbara was a beautiful, strong, smart, warm, and loving woman, who was compassionate towards others. She will be greatly missed by all who knew her. A life celebration will be held at a later date due to the pandemic. In lieu of flowers, the family asks donations to be made to IBC Network Foundation, P.O. Box 908 Friendswood, Texas 77546 or Blue Rudge Hospice, 333 W. Cork St #405 Winchester, VA 22601.

BARBARA ANN KNOWLTON GUSTAVSON, 65, of Woodstock, Virginia, died peacefully in her sleep at home on May 8, 2020, after living life to her fullest following a diagnosis of inflammatory breast cancer in October of 2016. Barbara was born in... View Obituary & Service Information

The family of Barbara Knowlton Gustavson created this Life Tributes page to make it easy to share your memories.

Send flowers to the Gustavson family.