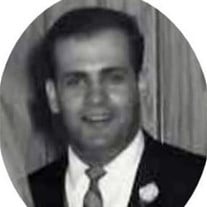 Basil Nicholas (Bill) Politis, boisterous, loving, and larger-than-life husband and father passed away on January 9, 2019. In his lifetime he was known for many things: bouncing babies, piloting airplanes, singing silly songs, giving bear hugs, bestowing nicknames, and being provider, protector, and head of his family. Bill was born to Basil and Neatza Askounes Politis in Wilkes-Barre, Pennsylvania, on November 19, 1941. He was a graduate of the Miami Beach Ski School, held the title of Pro Marksman from the National Rifle Association, won the Milt Grant Dance Contest, portrayed Chief ThunderCloud, and kicked the winning field goal for Calvin Coolidge High School’s championship football game - all by the age of 18. Following in the footsteps of his restaurateur father, he owned and ran an ice cream parlor in Georgetown in the early 1960’s, where his most notable clients included Jackie Kennedy and son John-John. After his photo won the Washington, D.C. Rock Hudson look-alike contest in 1959, he charmed his way into Kathy Welkener’s life with nothing more than a temperamental Jaguar and an enormous pumpkin. On May 21, 1966, they married and began a series of adventures that would take them from Washington, D.C. through Chicago, Illinois, Roswell, Georgia, and finally, back to Mt. Jackson, Virginia. Bill was a successful salesman and entrepreneur who enjoyed spoiling his dogs and flying his small aircraft. His fondness for dogs began in boyhood, and his home was never without at least one loyal, four-legged companion. They were a part of the family and were a joy and comfort to him from his early years through to the very end. He earned his private pilot license in the late 1960’s and flew small aircraft as a treasured hobby for decades. He often spent Saturday mornings practicing take-offs and landings while his children took turns as co-pilot. In addition to being a devoted husband, he was also a dedicated and loving father. He arranged wiffle-ball games, built massive snowmen, and chased fireflies with all the neighborhood children, and they would often knock on the door to ask Kathy, “Can Mr. Politis come out and play?” He attended nearly every sporting event, recital, concert, and achievement for all three of his active children, even if it meant catching a plane home in the afternoon to attend the event and then travelling back again late in the evening to make a morning sales meeting in some far-off city. He encouraged his children to play sports, and he spent thousands of hours coaching and cheering for them and their teammates. Later in life, he loved to run into those teammates and hear about their adult lives. Bill’s legacy of family traditions, including great pumpkins and apple-picking, will be carried on by the love of his life and wife of 53 years (Kathy Politis), his eldest daughter and son-in-law (Eileen and Joe Shackleford), his only son and daughter-in-law (Brian and Diane Politis), his youngest daughter and son-in-law (Kate and Clyde Watson), his grandchildren (Elizabeth and Christine Shackleford, Clyde N. and Alexis Watson, and Nicole Politis), his brother (James Politis), and numerous friends of his children who thought of him as a second father. A Mass of Christian Burial followed by a reception of storytelling and celebrating his life will be held at St. John Bosco Roman Catholic Church in Woodstock, Virginia, on Monday, January 21, 2019 at 11:00 a.m. In lieu of flowers, donations may be made in his memory to veterans’ organizations.

The family of Basil Nicholas (Bill) Politis created this Life Tributes page to make it easy to share your memories.

Send flowers to the Politis family.