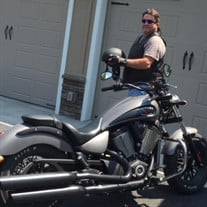 Billy Jack Carter, 63, of Maurertown, Va., born 8/26/1958 in Wurzburg, Germany at the Wurzburg Army Hospital. He passed away from complications of ALS at his home on October 4, 2021. Survived by his faithful wife, Selesta Feller Carter, his mother Else Roswitha Carter of Woodstock, Va., three sisters, Barbara Poorman (Rob O’Neill) of Miami, Florida, Rebecca Carter-Nutter (Jeff) of Edinburg, Va., and Tracy P. Miller (Rick) of Edinburg, Va., two sons, Shawn Gallo of Orlando, Florida, and Billy Jack Dakota Carter of the Bahamas. Stepdaughters, Abbie Williams (Faheem) of Mt. Jackson, VA. And Katie Funkhouser of Birmingham, AL. Nine grandchildren, Lake Lockhart Carter, Nevaeh Mays, Amara Williams, Sensei Williams, Ezekiel Williams, Essence Williams, Eternity Williams, Claire Ritenour, and Paisley Kirby. He had a very special relationship with his nieces and nephews, Tyler Poorman, Molly Poorman, Samantha Poorman, Perla Torres, and Tanner Orndorff. Brother-In-Law, John (JP) Poorman and numerous aunts, uncles and cousins throughout Germany and the United States. Billy was a graduate of Central High School, class of 1977. He served with the United States Army from April 1979 to July 1983, stationed in Germany and Kansas. He lived in Miami Springs, Fl. for over 30 years and moved back to the valley in 2016. He worked for various family members in painting and property management allowing him to travel to many islands and throughout the United States. In 2016 he moved to back to Virginia where he was self-employed until he began working for Stonewall Jackson High School. Billy was a true Washington Redskins fan, he loved riding his motorcycle, hunting and fishing, hanging out with friends and family and eating at the Woodstock Café. He loved Peanut Butter Pie, Reese cups, and any meal prepared by his sister Barbara. All who knew him, knew he had a saying for every situation, “To the Moon”, “Whoa Captain”, “Mudda Sic” and many more. He grew up in the Catholic Church and served as an altar boy, he also attended other area churches. Predeceased by his father, George Robert Carter, maternal and paternal grandparents, Uncles Jimmy and Thomas Carter, Emil, Jacob, Berthold, and Wolfgang Sauer and his aunt Nancy Carey. Billy was diagnosed and suffered from ALS for over three years, the family is asking that in lieu of flowers, donations to the ALS Association can be made. The ALS Association, 1300 Wilson Blvd., Suite 600, Arlington, VA. 22209 ([email protected]). The family would also like to thank the Home Instead caregivers and the Veterans Administration for their support during his illness. A private service for the family is planned. Take it to the limit one more time.

Billy Jack Carter, 63, of Maurertown, Va., born 8/26/1958 in Wurzburg, Germany at the Wurzburg Army Hospital. He passed away from complications of ALS at his home on October 4, 2021. Survived by his faithful wife, Selesta Feller Carter, his... View Obituary & Service Information

The family of Billy Jack Carter created this Life Tributes page to make it easy to share your memories.

Send flowers to the Carter family.