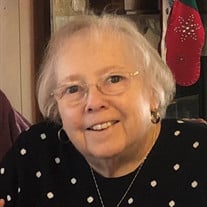 Carol Ann Tanczos, 81, of Basye, Virginia died peacefully at home surrounded by family and friends on Thursday, February 17th, 2022, following a three-year battle with cancer. Carol was the matriarch and heart of her family. She loved life and made every day a special celebration. She had a gift for entertaining, cooking, creating lasting friendships, and turning any ordinary event into a party to be remembered. Carol handled her diagnosis and illness with grace and dignity. She continued to travel and do activities she loved for as long as possible. Her fun-loving personality and laugh will be missed by everyone who knew her. Carol was born to John S. and Doris H. King of Westfield, Massachusetts. She had two brothers, Robert J. King (deceased) survived by (wife Anita, niece Robin and nephew Robert Jr.) and brother William J. King of Riverside Connecticut (wife Mary, niece Sara and nephew Ryan). Carol was a dancer in her early years known as “Little Miss King” and performed for audiences in her hometown of Westfield, Massachusetts, and nearby neighboring towns. After Carol graduated high school, she attended Westfield State Teachers College in Westfield, Mass, and began a teaching career in Brockton Massachusetts. Carol moved to the Northern Virginia area in 1969 and taught at Hybla Valley and Woodley Hills elementary schools in Alexandria, Virginia. Carol found gratification teaching children to read, write, and draw, meeting them at their level in a kind and caring way. Following the death of her first husband, Carol continued to work as a teacher for Fairfax County Public Schools while raising her two daughters. Several years later, Carol met her soul mate Richard C. “Dick” Tanczos and they married on February 7, 1976. Carol and Dick shared a love of traveling, cooking, and entertaining. Carol and Dick created a blended family with Carol’s two daughters and Dick’s son. Through Dick, Carol learned to ski and play golf and tennis. The family enjoyed many ski vacations in Vermont, the Poconos, and at Bryce Mountain Resort. The beach was a special place to Carol, who enjoyed vacations at Cape Cod, Myrtle Beach, Hilton Head, and Maine. Carol and Dick began visiting Bryce Mountain Resort in the 1970’s. In 1986, they purchased their Bryce Home and developed long and lasting friendships with the many wonderful people she considered her “Bryce Family”. While working, Carol obtained two master’s degrees from George Mason University in Education and Administration and continued her career as a reading specialist. She was a member of two professional fraternities, the Delta Kappa Gamma Society International (Promotes Professionalism in Education) and Phi Delta Kappa (Promotes free Public Education). She was an officer with the Greater Washington Reading Council and had the opportunity to have tea with First Lady Barbara Bush to discuss her Literacy Campaign. Carol was actively involved in the Ladies Bryce Golf Association, the Bryce Ladies Golf Tournament committee, and the Shenandoah Valley Music Guild. She loved playing bridge, dominoes, and canasta with her Bryce lady friends. She was also a past-member of the Basye-Bryce Lions Club. She is preceded in death by her first husband Edward J. Healey and is survived by her two daughters, Karen Lanham of Leesburg, VA (husband Rick, grandson Alex and granddaughter Sydney), and Kathleen Healey of Springfield, VA (granddaughter Carol Lynne, deceased and great-grandson Liam). Carol is also preceded in death by her husband Dick and survived by her son Rik Tanczos of Alexandria (wife Kim, granddaughter Ashleigh Tanczos Ewers (husband Chris), greatgrandchildren Caleigh and Grayson, and grandson Payton Tanczos). Words cannot express our gratitude to those who helped and supported Carol over the last several years in her fight against cancer. In lieu of flowers, Carol’s family has set up a donation link to St. Jude Children’s Hospital, her favorite charity. Her recent battle reinforced the importance of helping children survive their fight against cancer. Please click on the link below if you would like to donate to St. Jude. https://fundraising.stjude.org/site/TR/GiftFunds/GiftFunds?px=7378797&pg=personal&fr_id=39300 A Memorial Service for family and friends will be held in April at Bryce Mountain Resort. Carol will be greatly missed by all who loved her, but we envision her reunited with Dick and the two of them lighting up Heaven with their incredible spirit. Party on Carol and Dick.

Carol Ann Tanczos, 81, of Basye, Virginia died peacefully at home surrounded by family and friends on Thursday, February 17th, 2022, following a three-year battle with cancer. Carol was the matriarch and heart of her family. She loved life and... View Obituary & Service Information

The family of Carol Ann Tanczos created this Life Tributes page to make it easy to share your memories.

Send flowers to the Tanczos family.