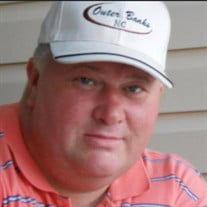 Charles David Fansler, 51, son of Vondrea Melton Fansler and Willard Fansler passed away on Saturday, June 13, 2020 at Sentara Rockingham Memorial Hospital from a heart attack. He was born, Charles Randolph Moore, in Albuquerque, New Mexico on Good Friday, April 4, 1969. He married Danielle Burruss on May 23, 1993. He started his first business, Kwik Start Kindling while he was still in college. His second business was KSK, a gourmet coffee, tea, and gift retailer. He turned that business into KSK's Harmony Garden Cafe. He was a chef that had the privilege of being mentored by several different chefs. He was an artist, an author and a professional photographer using the pseudonym Lasla Moore. He was the current vice president of Basye Land Company. He was past vice president and safety director of Blue Ridge Truss and Supply, Inc. He was a 32nd Degree Scottish Rite Mason and a Knight of Saint Andrews. He was a two-time past master of Mt. Jackson #103, two-time past master of Hunter #135, a member of Cassia #142 and past President of the Shenandoah Valley Scottish Rite Club. He was a member of the Order of the Eastern Star. He was a trustee of the Brazen Pillars Chapter of the VAWSMRA. He was the proud Dad of three daughters and two sons plus grandad to one beautiful granddaughter. He loved his family dearly and talked about them to everyone that he met. He was a big man with an even bigger heart. He loved helping others and truly believed in treating others the way you want to be treated. He loved learning, astronomy, traveling, hunting, fishing, skiing, dancing, music, coin collecting, collecting books, riding his Harley with Danielle, spending time with family and so much more. He is survived by his widow, Danielle Burruss Fansler of Basye, VA., his oldest daughter Kavondrea Ostara Fansler of Basye, his oldest son Charles Marcus Fansler of Basye, VA., his middle daughter Suzanna Victoria Andromeda Fansler, her daughter Isabella Grace, her boyfriend Devin Fitzgerald of Harrisonburg, VA., His youngest son, James Randolph Fansler of Basye, VA, his youngest daughter Lazandra Marie-Mae Fansler of Basye, VA., his mother Vondrea Melton Fansler of Basye, VA, numerous aunts, uncles, cousins, and friends. He was preceded in death by his father Willard Fansler of Basye, VA, his grandparents, his uncle, cousins, and many dear friends. He will be greatly missed. A Memorial Service will be held on Saturday, June 27, 2020 at 2:00 P.M. at Dellinger Funeral Home, Mt. Jackson. Pastor Steve Wood will officiate. The family will receive friends prior to the service from 1-2 P.M. at the funeral home.

The family of Charles David Fansler created this Life Tributes page to make it easy to share your memories.

Send flowers to the Fansler family.