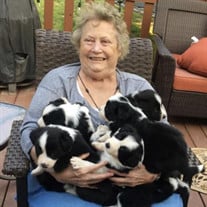 Clara Hampton Johnson Polk, 78, of Mount Jackson, passed away on Tuesday, August 11, 2020 in Harrisonburg VA after a lengthy illness associated with diabetes. A recent resident at Life Care Center of New Market, Ms. Polk had lived in various locations in Virginia since she was an infant. The daughter of Gerald Johnson and Catherine MacIntyre Johnson, she was born on August 31, 1941 in Cape Girardeau, MO and named after her maternal grandparents. She grew up in Nelson and Amherst counties in VA and graduated from Amherst County High School in 1958. She pursued a nursing career at Riverside Hospital in Newport News VA, achieving her childhood dream as a Registered Nurse in 1960. A highly skilled and dedicated Operating Room nurse at Riverside, she received advanced training in open heart techniques, serving as Coordinator for that program. Subsequently, Ms. Polk worked for many years with the Newport News Neurosurgical Associates where she gathered patient care information as well as assisted during surgery procedures. She retired from that position in 2001. During her career she was a contributing member of the local and national Neurological Nurses Association, traveling annually and participating in professional training sessions as well as making in-depth presentations on various topics in her field. In childhood, she was a supportive member of the Amherst Presbyterian Church and later the Crossroads Bible Baptist Church at Hudson Crossroads VA, followed by Community Mission Church of the Brethren in Woodstock VA. Throughout her adult life, Ms. Polk made major contributions to social gatherings and community events. She could always be counted on to participate fully and with a glad heart to others in need and less fortunate than she. Her kindness is remembered in all the lives she touched. Ms. Polk was married to Melvin Derrick Polk of Mount Jackson on August 15, 1964. Together they made their welcoming home in Newport News VA for over forty years, pursuing careers and richly enjoying gardening and social activities with friends and family. Ms. Polk especially enjoyed activities in the Women’s Club of Hilton Village. The couple moved to Mount Jackson VA in April 2006 and were able to enjoy the many family and community events locally. Mr. Polk passed away on July 1, 2009. Ms. Polk’s parents and sisters Geraldine Gholson, Jeanne J. Harris, and Patricia J. Brockman also preceded her in death. She is survived by her brother, Richard Neely Johnson of Lynchburg VA and a sister, Catherine J. Bailey, of Arlington, VA as well as numerous nieces, nephews, other family members, and special friends. Ms. Polk was especially honored in recent years to have the support and loving care of her niece, Karen Allebaugh of Lacey Spring VA. The family especially appreciates the attention and therapies provided to Ms. Polk during her stay at Life Care Center of New Market VA. In lieu of flowers, the family suggests that donations may be made to Conicville Volunteer Fire Department, 763 Conicville Road, Mount Jackson, VA 22842; or Mount Jackson Rescue and Fire Department, Inc .P.O. Box 251, Mount Jackson, VA 22842; or Orkney Springs Fire and Rescue, P.O. Box 347, Basye VA 22810. A “Celebration of Clara’s Life” service is being planned according to her directive. However, the pandemic associated with the COVID virus demands that the service be delayed until a later time when all may safely and comfortably attend. An announcement is planned for the future. Arrangements are in the care of Dellinger Funeral Homes, Mt. Jackson.

The family of Clara Johnson Polk created this Life Tributes page to make it easy to share your memories.

Send flowers to the Polk family.