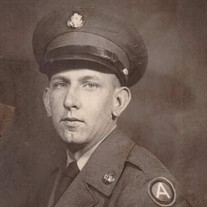 Clifford Randolph Sandridge, 87 of Luray passed away Friday, June 10, 2022, at Life Care Center of New Market. Services will be at 11:00 A.M. on Tuesday, June 14, 2022, at Dellinger Funeral Homes, Mt. Jackson. Pastor John Boyd will officiate. Burial will be for family only. Clifford was born on July 1, 1934, in Penn Laird, Virginia and was the son of the late Tallie and Mildred Foltz Sandridge. He was a 1951 graduate of Montevideo High School. He served in the Army where he attended Army Engineer School. He was preceded in death by a stepson, Ricky Armstrong, and a sister, Bea McWilliams. He is survived by his loving wife, Edna; a daughter, Deb Stewart and fiancé Ricky Lightcap; 2 stepsons, Mike Armstrong and wife, Jane, and Jerry Armstrong and wife Nancy; a grandson, Logan Stewart; 2 step grandchildren, Mandy Minnick and husband Josh, and Cris Armstrong and wife Crystal; a brother, Wayne Sandridge and wife Mag, and a step sister-in-law, Belinda Armstrong. In lieu of flowers, memorial donations may be made to Mill Creek Bible Church 4903 Mill Creek Road, Luray, Virginia 22835. Arrangements are in the care of Dellinger Funeral Homes, Mt. Jackson.

The family of Clifford Randolph Sandridge created this Life Tributes page to make it easy to share your memories.

Send flowers to the Sandridge family.