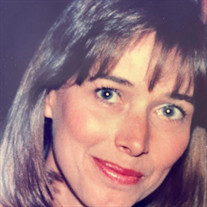 Cynthia Allen Basile, 71, passed away peacefully on Tuesday, January 26, 2021 at Greenfield of Woodstock in Woodstock, Virginia. Cyndy was born on August 18, 1949 in Carrollton, Illinois, the first of three daughters, to Carroll and Patricia Allen. The family moved several times when Cyndy was a small child and settled in New Carrollton, Maryland by the time she began middle school in 1961. Cyndy graduated from DuVal High School in 1967 where she excelled in science (having large collections of pinned insects in boxes that she studied, slides and microscopes, but of course the biggest collection were 45s and albums of the Frankie Valli, Petula Clark, Chad & Jeremy, and the Beatles…Paul was her favorite). She was also a member of her school’s Madrigal Singers where she was an angelic first soprano. In the fall of 1967 Cyndy attended Illinois College; her parents’ alma mater where they had met and fallen in love. Cyndy did the same. She met and married Jim Brown in December of 1968 before he reported for pilot training in the U.S. Air Force during the Viet Nam War. Until their son, James Allen Brown, was born in 1971 they were stationed in many cities throughout the United States while Jim was in the military overseas. Cyndy settled her family in Hampton, Virginia while Jimmy was a toddler and then upon her husband’s voluntary discharge from the military the family moved to Chicago, Illinois. In 1975 Cyndy came back to the Maryland area where she had spent the majority of her childhood and her parents still lived. Shortly thereafter she began a career where she would become the Director of Administration at the American Academy of Actuaries in Washington DC until 1987 when she married a man 13 years her senior and moved to Fairmont, West Virginia to begin an early retirement. Cyndy and her husband, Louis “Buck” Basile, ran a small wedding video business during the first decade they lived in West Virginia and then permanently retired. They were very happily married for almost 30 years before his death in 2017. Cyndy loved her life with Buck. They bought their “honeymoon” cottage at Rock Lake in Fairmont shortly after they married. They adored it there and never wanted to live anywhere else. Cyndy created the life she had always dreamed of at Rock Lake. Their home was always warm and welcoming and filled with good people, good food, good times and wonderful memories with friends and family. After Cyndy’s husband Buck passed away, those of us who watched her suffer the loss were happy when she met Lynn Fox in Winchester, Virginia in 2019. Lynn and Cyndy became inseparable during the last year-and-a-half of her life and loved one another until she took her last breath. As Cyndy passed we are sure Buck was waiting for her on the other side with a smile, a cup of coffee and open arms, along with Cyndy’s parents, grandparents and the many family and friends who had passed before her. Cyndy is survived by her son, James Allen Brown, and his wife Angelika Avery; her niece, Bobbi Basile and her husband Philip Hamilton; her sisters, Karen J. Allen and Kathleen Allen Crawford; her sister-in-law, Louise Basile; her nieces and nephews, Kerry Trahan, Brian Thrift, Jessica Holmes, and Nick Browne; and her great nephews, Justin Trahan and Jake Trahan. We will love and miss you until we meet again. “Love one another, but make not a bond of love: Let it rather be a moving sea between the shores of your souls.”

Cynthia Allen Basile, 71, passed away peacefully on Tuesday, January 26, 2021 at Greenfield of Woodstock in Woodstock, Virginia. Cyndy was born on August 18, 1949 in Carrollton, Illinois, the first of three daughters, to Carroll and Patricia... View Obituary & Service Information

The family of Cynthia Allen Basile created this Life Tributes page to make it easy to share your memories.

Send flowers to the Basile family.