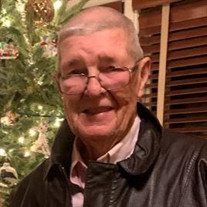 Retired Owner/Operator, Beltway Mobil/Sunoco Dallas Lee Lunceford, 82, retired owner/operator of Beltway Mobil/Sunoco in Annandale, VA, died February 2, 2021 from complications of dementia. A resident of Maurertown, Va., Lunceford was born May 22, 1938 in Alexandria, Va., and spent most of his adult life in Annandale outside of Washington, D.C. He retired to the Shenandoah Valley in 2015 to ride around on his tractor mowing grass and enjoy a slower paced mountain and river life. Lunceford dropped out of secondary school before graduation, and worked at Eastern Airlines before moving from Alexandria in 1968 to open the Beltway Mobil service station. Throughout the next 40 years, “Bo” Lunceford’s service station was a fixture in town, providing auto repair, gas, towing and other services, as well as support for the community by sponsoring little league teams, driving floats for school/town parades, and supporting local charities. Lunceford was a past-Master of Elmer Timberman Masonic Lodge No. 54 in Annandale, Va., and was active in numerous related masonic organizations including the Kena Shriners. He was a member of both the Antique Car Club and Motor Corps, participating in related competitions nationwide, and winning trophies for skill-riding Harley Davidson Ultra’s as part of the Parade and Precision Drill team. He also won car show awards for various restored antique cars, including his beloved 1951 Lincoln Continental. He was a member of the Loyal Order of Moose Lodge #575, Woodstock, Va. Lunceford not only enjoyed competing with his motorcycles, he took numerous cross-country bike trips with friends to Harley-enthusiast gatherings in Sturgis, SD, as well as a once-in-a-lifetime drive through some of the nation’s most beautiful landscapes in a trip from Virginia to Alaska and back. He was an avid fisherman who enjoyed catching them more than eating them. Lunceford was married twice, first to Joyace Lea (Hurley) Lunceford, who passed from a ruptured brain aneurysm, then to RoseAnn (Brown) Lunceford. Lunceford is survived by his wife of 55+ years, RoseAnn, his sons Stephen (Marianne) and Scott, and his grandchildren Allie and Chris. He is also survived by his sister, Janet Simmons of Springfield, Va., as well as 17 nieces and nephews. A memorial service will be planned for a later date, and the family’s online remembrance page may be viewed and signed at dellingerfuneralhome.com. In lieu of flowers, memorial contributions may be made to Shriners Children’s Hospital at https://donate.lovetotherescue.org/fundraiser/3120134

The family of Dallas Lee Lunceford created this Life Tributes page to make it easy to share your memories.