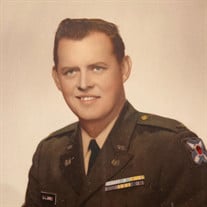 Daniel Grayson Jones, 91, of Woodstock, Virginia passed away in his sleep Sunday, November 21, 2021. Services will be held at 2:00 P.M. on Wednesday, December 1, 2021 at Grace Baptist Church for close friends and family. Pastor Kenneth Sparks will officiate. Burial will follow in Sunset View Memorial Gardens will military honors. The pallbearers will be his grandsons, Jeremiah, Josh, Justin, Ryan, Grayson and Dan. The family will receive friends Tuesday, November 30, 2021 from 6-8pm at Dellinger funeral home in Woodstock. There will be A Masonic service at 7:00 P.M. Dan was born September 13, 1930, in Washington D.C. and was the son of the late Daniel Hardy Jones and Helen K. Sparshott Jones. He is survived by his wife, Judith Jones; his sister Beverly Mayo, and his children, Debra Hunt (Rob), Gary Jones (LeeAnn), Micki Zerkel (Ronnie), and Bill Jones (Cassaundra); 9 grandchildren, Jeremiah, and Josh Hunt, Justin Koontz, Shelby Flick (His Iggy), Ryan Zerkel, Grayson, and Charlotte Jones, Nicole Zipp, Dan Jones, and; 7 great grandchildren, Kara, Briona, Haylee, Nathan, Davy, Lia, and Peyton. Dan married Judith Nevin Jones on February 26, 1961, having just celebrated their 60th wedding anniversary this past February. Dan attended Western High School in Northwest Washington DC. He joined the Navy right after high school and served for three years. Afterwards he transferred to the Coast Guard serving two years in the Korean War. After returning to the States, he continued his military service, transferring to the Army reserves, where he served until he retired with a total of 40 years of service and a rank of Chief Warrant 4. After his service in Korea, Dan joined the Metropolitan Police Department. He worked several years on the force in D.C, but left the department or a short time, moving to Jupiter Florida and joining the police force there with his brother-in-law, Glenn Mayo. After a year in Jupiter, Dan returned to the Metropolitan Police Department where he worked until he was injured and retired in 1969. Dan and his wife, Judith loved to travel, never hesitating to jump in the station wagon or pickup and drive across country on a moments notice. Dan and Judy have traveled to all 50 of the beautiful states within this Country, many of them several times. They love to drive so much that even while they were living in Florida for a few years, they would drive up to Edinburg, VA for their Dentist appointments, then turn around and drive back to Florida. Dan loved to fish and spend time on his many boats that he owned at one time or another. He could always be found tinkering out in the garage in the boat or working on trailer lights. Dan also loved to hunt and spent many a cold morning sitting out under a tree, or in later years inside the truck with his father-in-law and / or sons waiting for that elusive buck to walk by. Dan was an active member of Grace Baptist Church of Woodstock, a Master Mason in the Cassia lodge No. 143 of Woodstock, a member of the local American Legion the VFW and the VVA Chapter 936. Dan and Judy liked to attend many of the local dinners around the Valley, especially oyster dinners. Dan possessed a very outgoing personality. He had a knack for walking up to any stranger and starting a conversation. With a few minutes he would know everything about the person Dan and Judy loved to remodel old houses, having completely redone two houses, one in Edinburg and the other in Quicksburg. There was not a thing that they could not do, anything from plumbing and electrical work to framing and drywall. They could have easily had the first fixer-upper show on tv. In lieu of flowers, memorial contributions can be made to your favorite charitable law enforcement or military organization.

The family of Daniel Grayson Jones created this Life Tributes page to make it easy to share your memories.

Send flowers to the Jones family.