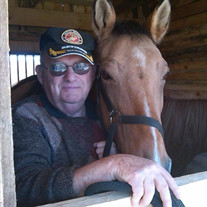 Major Danuel L. Smith, USMC retired, of Woodstock, Virginia, passed away on Sunday, May 9 after a swift illness. His family was able to be with him at the end. Major Smith was born in Bexar, Texas on December 2, 1941. His mother died while he was very young, and her sons Dan and Sam grew up under difficult circumstances. Because their father was in the Air Force, the family moved frequently. While their father was serving in the Korean War, both boys spent time at Cal Farley’s Boys Ranch in Texas, where their youthful energy was redirected to riding horses and herding cattle. It was during this time that Dan grew to be an accomplished western horseman -- family wisdom said that in his prime there was nothing he couldn’t ride. After graduating from high school in Portsmouth, New Hampshire, Dan enlisted in the United States Marine Corps, a decision that would set the course of his life. Major Smith’s career in the Marines took him from Afghanistan to Sri Lanka (where he met his future wife and love of his life, Helen Jean) to Laos to Vietnam to Japan, with less exotic stints in Parris Island, Quantico, Camp Pendleton, and Virginia Beach. After 8 years as an enlisted man, and after rising to the rank of Gunnery Sergeant, he was selected to go to Officer Candidate School and was commissioned a second lieutenant in 1969. He survived three tours in Vietnam, two as an enlisted artillery forward observer and a third as an infantry officer and platoon leader. He retired from the Marines in 1980 with the rank of Major, and was briefly recalled to active duty in 1991 during Desert Storm. His military awards include the Silver Star, two Bronze Stars with Combat V, the Defense Meritorious Service Medal, a Navy Achievement Medal with Combat V, Three Purple Hearts, a Presidential Unit Citation, and numerous service and campaign awards. He was a warrior who did difficult things, and when he laid down his arms at the end of his military service, he never forgot or romanticized what war did to him and the other young men he served with. After retiring to Shenandoah County, Virginia, Major Smith did a little bit of everything, from managing a hardware store to teaching to raising sheep. He found his true second calling, and a second career, by working to support other veterans as an agent for the Virginia Department of Veteran’s Affairs. He helped countless veterans navigate bureaucracy to get the benefits and care that they deserved. For years after he retired from the state, he received updates and notes of thanks from the families that he had helped. After his second retirement, he donated his time to the Shenandoah County Public Library, in the archives, delving into county history and genealogy research. He found time to read voraciously, tinker on the farm, and tell stories both hilarious and haunting. He loved his family and his dogs above all else. His passing will be mourned by many, but in particular by his wife of almost 54 years, Helen Jean Smith; his son, Lieutenant Commander Charles “Chuck” Smith (US Navy retired), and daughter-in-law, Wendy Beek Smith of Fredericksburg, Virginia; his daughter, Danielle Smith and son-in-law Johann Coetzee of Bristol, Tennessee; his grandchildren Second Lieutenant Trevor Smith (US Army) and his wife Kara, Emily Smith, and Zachary Kiser; his great-grandson Ian Smith, and his nephews Chief Warrant Officer Warren Smith (US Army retired) and Danny Smith and niece Christine Akkanen. He was also much loved by his sisters-in-law, Sharon McKnight and Linda McKnight, both of Toronto, Ontario. He was preceded in death by his parents, Chief Master Sergeant Samuel (US Air Force retired) and Pearl Dunham Smith, and by his brother, Master Sergeant Samuel Smith (US Air Force retired). Interment will take place at Arlington National Cemetery at a future date. In lieu of flowers, contributions can be directed to Gentle Giants Draft Horse Rescue in Mt. Airy, Maryland, the Shenandoah County Library Foundation in Edinburg, Virginia, or the Friends of the North Fork of the Shenandoah River in Woodstock, Virginia. The family thanks all of the staff at Winchester Medical Center for their care, compassion and wisdom.

Major Danuel L. Smith, USMC retired, of Woodstock, Virginia, passed away on Sunday, May 9 after a swift illness. His family was able to be with him at the end. Major Smith was born in Bexar, Texas on December 2, 1941. His mother died while... View Obituary & Service Information

The family of Danuel L. Smith created this Life Tributes page to make it easy to share your memories.

Send flowers to the Smith family.