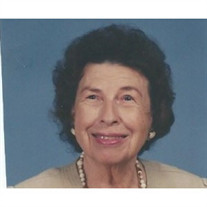 Elizabeth (Betty) Dalke Sollenberger, 96, a lifelong resident of Woodstock, died, Wednesday, July 3, 2013 at Greenfield Assisted Living, Woodstock. Mrs. Sollenberger was born on April, 25, 1917, the daughter of William F. Dalke, Sr. and Nora Carroll Dalke. Mrs. Sollenberger was predeceased by her husband of 54 years, C. Thomas Sollenberger, Sr., her daughter, Conee Sollenberger Walser, her parents, and her brother, William F. Dalke, Jr. She is survived by her sister, Lillian Morrison of Glastonbury, Conn., her daughters, C. Jean Ehlman, and Peggy Sollenberger, and sons, C Thomas Sollenberger, Jr. and Richard W. Sollenberger. She is also survived by 4 grandsons, David A. George, Christopher W. George, C Thomas Sollenberger, III, and Jonathan R. Sollenberger as well as 6 granddaughters, Beth George Dirting, Christie Walser Mullins, Adrienne Walser, Marsha Sollenberger Cooper, Dawn Sollenberger Hawthorne, and Amy Sollenberger Cardenas, along with 11 great-grandchildren. Betty attended Madison College where she was a Physical Education major. She was a lifetime member of the United Church of Christ in Woodstock where she served in several capacities over the years. She was a member of the Shenandoah Garden Club, winning many awards over the years and giving talks to other garden clubs all over Virginia. She spent much time beautifying Woodstock and the Riley Park at its inception through the garden club. She worked for many years in many capacities for better schools. Education was first and foremost important to her and her husband, Tom. Betty’s last endeavor was to be very actively involved with getting petitions signed to save the old Woodstock High School and have it renovated into the present Shenandoah County Government Building instead of replacing it with a metal building. She was in her late 80’s, driving to meetings, talking to people, and rallying behind a cause she thought was important. And she succeeded. The Wednesday Afternoon Bridge Club was something she never wanted to miss. She loved to play bridge with her friends and was extremely good at it. She was also a member of The Chatter & Stitch, the Shenandoah County Republican Party, and various other clubs over her long life. Betty and her husband, Tom, were also very involved with their alma mater, Massanutten Military Academy, and supported that school in various ways. She took 2 years of post-graduate secretarial work at MMA where she received a commercial business degree before going to Madison College. She helped her father, Billy Dalke, with the ticket booth at his local theater as a teenager and young adult, as well as assisting him as secretary and bookkeeper. Betty volunteered as a certified teacher of the Red Cross swimming program in Woodstock for more than 10 years and later taught friends in her private pool. She enjoyed music by playing the piano, dancing, and going to music festivals. She enjoyed playing tennis and going horseback riding on her own horses. She loved to travel the country with her husband, Tom. Most importantly, Betty always encouraged her children to study hard, go to church, be in various clubs and activities, be good citizens, and go to college. She was a homemaker to the Ninth degree, as she raised all five of her children, of whom she was very proud. Her Celebration of Life will be held at St. Paul’s United Church of Christ, 235 S. Main St., Woodstock on Saturday, July 27th, at 3pm. Burial will be private. In lieu of flowers, memorials may be sent to St. Paul’s United Church of Christ. Arrangements are being made by Dellinger Funeral Homes in Woodstock, VA.

The family of Elizabeth Dalke Sollenberger created this Life Tributes page to make it easy to share your memories.

Send flowers to the Sollenberger family.