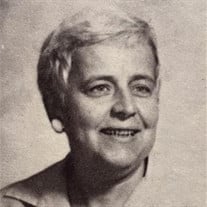 Elizabeth “Betty” Benchoff Page, 93, a graduate of Woodstock High School and a former member of the Board of Trustees at Massanutten Military Academy, died on Thursday, March 21, 2019, at Greenfield Senior Living of Woodstock. Mrs. Page was born December 19, 1925, in Woodstock, daughter of the late Guy Anderson and Katharine Hottel Benchoff, from whom she was gifted marvelous musical abilities. Early in life, she was a member of St. Paul’s United Church of Christ in Woodstock. While living in Fairfax Virginia, she was a member of St. Alban’s Episcopal Church in Washington, D.C. Upon returning to Woodstock, she became an active member of Emmanuel Episcopal Church. Mrs. Page received a Bachelor of Arts degree in music and education in 1948 from Hood College in Frederick, Maryland, and a Master of Science degree in psychology in 1975 from James Madison University. Early on, she had a long career with the YMCA in both Kannapolis, North Carolina, and Port Huron, Michigan. Then followed several years as the Secretary of the Alumni Association at Hood College. Between 1967 and 1977, she was a beloved guidance counselor at Stonewall Jackson High School in Mount Jackson. Mrs. Page was actively involved with the Shenandoah Valley Music Festival and the 250th year anniversary of the founding of Woodstock. She was also a member of the National Society Daughters of the American Revolution, Narrow Passage Chapter. Mrs. Page was preceded in death by her husband of 20 years, William Henry Lee Page. Her brother, John “Jack” Milton Benchoff, also preceded her in death. Surviving are two sisters, Mrs. Ann Benchoff Stamm and Mrs. Barbara Benchoff Miles, both of New York; seven nieces and nephews; and eight grandnieces and grandnephews. Services will be held at Emmanuel Episcopal Church in Woodstock on Saturday, March 30, 2019, at 1:00 P.M. The Reverend Kathleen Murray, Rector, will officiate, followed by burial at Massanutten Cemetery. Visitors are welcome to come to the funeral home Thursday and Friday between 9 A.M. and 5 P.M. to privately view and pay their respects to Betty. Memorial contributions may be made to Emmanuel Episcopal Church, 122 East Court Street, Woodstock, Virginia 22664; Hood College, 401 Rosemont Avenue, Frederick, Maryland 21701; Massanutten Military Academy, 614 South Main Street, Woodstock, Virginia 22664; or St. Paul’s United Church of Christ, 235 South Main Street, Woodstock, Virginia 22664.

Elizabeth &#8220;Betty&#8221; Benchoff Page, 93, a graduate of Woodstock High School and a former member of the Board of Trustees at Massanutten Military Academy, died on Thursday, March 21, 2019, at Greenfield Senior Living of Woodstock. Mrs.... View Obituary & Service Information

The family of Elizabeth "Betty" Benchoff Page created this Life Tributes page to make it easy to share your memories.

Send flowers to the Page family.