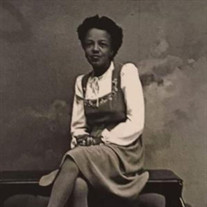 Esterlean R. Butler, 97, was called to her Heavenly Home on Thursday, December 3, 2020 in Strasburg, VA. Her passing was peaceful as she was surrounded by her 2 loving daughters. Ms. Butler was born in 1923 on the 7th day of September. She was the youngest of 2 daughters born to the late Lucian and Fannie Butler. She attended elementary school in Woodstock, VA and high school in Charlottesville and Harrisonburg. Esterlean accepted Christ earl and attended Mt. Zion Church in Woodstock and was later baptized in a church in Charlottesville, VA. She married Robert Toliver in March 1942. Two daughters were born in that union. Esterlean was a resident of Skyline Terrace Nursing Home in Woodstock for 5 years. She became ill there on November 15th and was transported to Winchester Medical Center and a patient there for 4 days. She returned to Strasburg to the home of her oldest daughter and son-in-law, Pat, and Charles Corley, where she received the loving care of her family. Esterlean was employed as a housekeeper, worked in a nursing home as an aid, and in a private home as a caregiver. She was employed at the Blue Bell Sewing Factory as a sewing operator for many years. She retired from there to take care of her mother and her uncle. She later cared for her first-born great grandson so his mom could complete her high school education. She had an incredibly special bond with each generation and was so very blessed by them all. She was known by many terms of endearment by her beloved family, beginning with sister, Lean, Mother, Momsie, Raws, Nanny, and GG. She was a member of Shenandoah Community Fellowship in Woodstock. She loved the word of God, Bible Study, and was a devoted Prayer Warrior. She constantly prayed for all her family and friends. She was a lady of great faith and a great example for all that she encountered by her walk with the Lord. Esterlean’s last 2 weeks of her life here on earth were very sweet and memorable as she was surrounded by her loving family. There were visits from her grandchildren, great grandchildren and great, great grandchildren those who live locally and those who lived in North Carolina. Thanksgiving was an especially memorable day filled with lots of love and tons of laughter. We are beyond grateful for that precious time with her and the family. Esterlean was preceded in death by her parents, her sister, Fannie Washington, and her son-in-law Leonard Alsberry. She leaves to cherish her memory; 2 daughters, Pat Corley (Charles) and Siomone Alsberry, both of Strasburg; 3 granddaughters, 9 great grandchildren and 6 great, great grandchildren. Two very dear and faithful friends, Sylvia Siebert and Carla Hoover of Mt. Jackson. Esterlean was truly one of a kind and left us with an incredible legacy. She will be profoundly missed by her beloved family and friends. A Celebration of Life will be in Riverview Cemetery in Woodstock at 1:00 P.M. on December 12, 2020. Pastor William Gess will officiate. In lieu of flowers, memorial donations may be made to the American Cancer Society, or Blue Ridge Hospice 333 West Cork Street Suite 405 Winchester, Virginia 22601.

Esterlean R. Butler, 97, was called to her Heavenly Home on Thursday, December 3, 2020 in Strasburg, VA. Her passing was peaceful as she was surrounded by her 2 loving daughters. Ms. Butler was born in 1923 on the 7th day of September. She was... View Obituary & Service Information

The family of Esterlean R. Butler created this Life Tributes page to make it easy to share your memories.

Esterlean R. Butler, 97, was called to her Heavenly Home on Thursday,...

Send flowers to the Butler family.