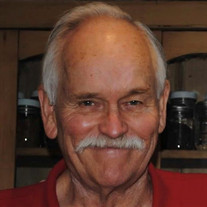 Fred Laird IV took his last peaceful breath surrounded by loving family and under in-hospital hospice care on July 23, 2021. Services will be at 11:00 A.M. on Friday, July 30, 2021, at Dellinger Funeral Homes, Woodstock and the burial will be at 2:00 P.M. on Friday in Beahms Chapel Cemetery in Luray. Pastor Cindy Carr will officiate. Fred was born on April 5, 1948, in Hanover, New Hampshire and was the only child of the late Fred Laird III and Jean Straw Laird. Fred’s parents were native to Vermont and, though he only lived there briefly, he considered himself a Vermonter as well. Fred’s father was an Officer in the Air Force, so the family lived overseas for much of Fred’s youth. He spoke fondly and often of the friends he made as an adolescent living in Ankara, Turkey. Fred finished up his schooling back in the states at Washington Lee High School. As a Senior, he met Sharon, his beloved wife of 54 years, while she was babysitting a boy in the neighborhood. To catch her attention, he played ball with the boy, and when she called the child in for lunch, Fred followed. He always said it was love at first sight. The two married young and built a life and family together in Virginia. Fred spent most of his career in the construction industry. He began as a laborer, then moved quickly up the ranks and eventually became co-owner of a concrete construction company. He and his crew built many high-rise buildings in Northern Virginia and helped rebuild the Pentagon after the 9/11 attacks. Fred was a man of deep integrity and was devoted to those he loved. There is nothing he wouldn’t do to help a friend and almost nothing he wouldn’t do to help a stranger. At 6’-7”, he was a towering figure, but his kind and friendly nature earned him the nickname “Gentle Giant” by many who knew him. Fred was an avid fly fisherman and never missed an opportunity to cast a line into a body of water. He often said Nature was his church and fly fishing was his favorite way to say a prayer. He was also passionate about playing Bridge - a long and strong tradition in the Laird family. After retiring he played weekly with a local bridge club and made many wonderful friends doing so. Though he had an engineer’s mind, Fred had a poet’s soul. In his later years, he put down his hammer and picked up a pen to write a book of beautiful essays about his time on the water contemplating existence through fly fishing. He will be deeply missed by his wife Sharon (née Stephens), his children, James (Suzanne), Jennifer (Randall Courts), his grandchildren, Kacey, Amanda and Quinn, and his great-grandchildren, Isla, and Tyson.

Fred Laird IV took his last peaceful breath surrounded by loving family and under in-hospital hospice care on July 23, 2021. Services will be at 11:00 A.M. on Friday, July 30, 2021, at Dellinger Funeral Homes, Woodstock and the burial will... View Obituary & Service Information

The family of Fred Laird IV created this Life Tributes page to make it easy to share your memories.

Send flowers to the Laird family.