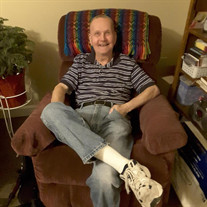 Gerald Andrew “Gary” Gray, 87, died on Monday, October 18, 2021, at his residence in New Market. A private memorial service will be held at the New Market Seventh-day Adventist Church. Gary was born on February 21, 1934, in Washington D.C., as one of seven children to George Gray and Alice O’Neill. After graduating from St. John’s College High School, he was drafted by the US Army in July 1954. He served in the 507th Signal Co in South Korea until honorably discharged in May 1956. Gary married Barbara Gerhart on May 10, 1957, and together they had five children: Mark Gray, Matthew Gray, Louis Gray, Dawn Hummer and Barbara Jo Mckay. He has nine grandchildren and five great-grandchildren. On November 14, 1971, Gary married Margaret Ann “Peggy” Carter. When Peggy died in 2019, they had been married 47 years. They had one daughter, Liane Edlund. From 1956-1991, Gary worked for C & P Telephone Company (Bell Atlantic) in Maryland, first as a lineman and later as supervisor and service manager for C & P’s blue chip program. He was an excellent telephone man, and his crew had the reputation of being able to fix anything. After retiring, Gary combined his interests in history and young people by volunteering and substituting in local schools, both public and private. He also enjoyed traveling to places of historical interest, particularly to Sweden where his daughter Liane resides. Gary is survived by his six children and three sisters, Jean Shackleford, Jackie Kelliher, and Nancy Vessel. He is also missed by his niece Karen Hardcastle and caregiver Rachel Temple. In lieu of flowers, memorial contributions may be made to the Worthy Student Program at Shenandoah Valley Adventist Elementary School, 540-740-8237.

The family of Gerald "Gary" Gray created this Life Tributes page to make it easy to share your memories.

Send flowers to the Gray family.