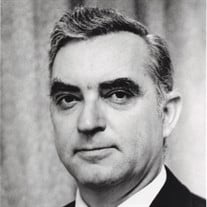 Glenn Robert Dickerson, 92 of Leesburg passed away Thursday, August 29, 2019 in Leesburg. Services will be 11:00 A.M. Wednesday, September 11, 2019 at Saumsville Christian Church. The family will receive friends 1 hour prior to the service. Pastor Joe Fleming will officiate. Burial will follow in the church cemetery. Glenn was born July 26, 1927 in Kansas. He was the son of the late Glenn and Tobitha Greening Dickerson. He was an Army veteran, serving during WWII. Glenn worked for the US Government. He began his career in 1951 at the US Customs Service. He was named Deputy Commissioner of Customs, the agency’s second highest post in 1974. In 1979, Mr. Dickerson was appointed Director of the Treasury Department’s Bureau of Alcohol, Tobacco, and Firearms. He retired in 1983 after 33 years with the US Government. In 1984, he was appointed Secretary-General of the Customs Cooperation Council. He was the first American to be named to this important international post. He held this position in Brussels, Belgium for 5 years. He was preceded in death by his first wife, Mary Dickerson and 2 siblings, Helen Clanton and Malcom Dickerson. Glenn is survived by his wife Erlinda; a stepson, Richard Ejorcadas; brother, Bill Dickerson; 1 granddaughter, Celine Elisse Ejorcadas and numerous nieces and nephews. In lieu of flowers, memorial donations can be made to HSLC (Humane Society) P.O. Box 777 Leesburg, VA, 20178 or Loudoun Hunger Relief 750 Miller Drive, Suite A-1, Leesburg, Virginia 20175.

Glenn Robert Dickerson, 92 of Leesburg passed away Thursday, August 29, 2019 in Leesburg. Services will be 11:00 A.M. Wednesday, September 11, 2019 at Saumsville Christian Church. The family will receive friends 1 hour prior to the service.... View Obituary & Service Information

The family of Glenn Robert Dickerson created this Life Tributes page to make it easy to share your memories.

Send flowers to the Dickerson family.