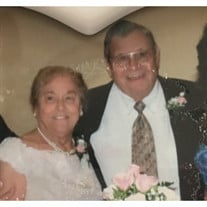 Goldyene Miller Harris, 86, passed away on April 11, 2018. She was born July 21, 1932 in Quicksburg, Va to the late William Harvey Miller, Sr & Julia Arlene Miller. She was preceded in death by her twin brother, Galen in 1975, and her sister, Dorothy Arbogast in 2017. She is survived by 1 brother, Dudley Miller and wife Pamela of Quicksburg, VA. Godson Bucky Miller . Goldyene was married to the love of her life, the late James “Dutch” Harris on June 14th, 1957. They resided in Mt. Jackson until his death in 2010. They are survived by two daughters, Becky Heishman and Vicki Harris-Williams. Becky & her husband, Steve, of Fort Valley, have 2 daughters, Beth and her husband Brian Orndorff of Zepp , Va and their children, Charlotte Belle & Steven Mathias. Youngest daughter Carie Marie and her husband Trey Neal, residing in Knoxville, TN. Vicki & her husband, Bill reside in Mt. Jackson, Va. Vicki has 2 sons, Brent Dahmer and Braden Harris Dahmer both residing in Richmond, Va. Brent & Brady have been devoted to their grandmother for her entire life. A special thank you and acknowledgement from the family to Lauren and Meghan for their love of my sons and the love and care they have both shown to our mom. Bill and Vickie share 2 grandsons and 1 granddaughter. She is further survived and remembered by numerous nephews and nieces. As well as great nephews and nieces. Goldyene was owner and operator of Goldyene’s Beauty Shop in Mt. Jackson for 50 years. She developed a close relationship with her patrons over the years and loved being a beautician . She was a member of Shannon Oil company’s lady’s bowling team for 30 years and an avid golfer during this time as well. Goldyene was a former member of the Ladies Auxiliary of the Mount Jackson Rescue Squad and Mount Jackson Lioness Club. She enjoyed Charlestown Races and gambling casino. Her last birthday included an outing to Charlestown with her family. She was a former member of St. Martins Lutheran Church, in Quicksburg, VA and longtime member of Mt. Calvary Lutheran Church in Mt. Jackson. She enjoyed crocheting and cooking and spending time with her family. Goldyene later moved to Commonwealth Senior Living in Front Royal where she was cared for. made many friends and was loved. The Funeral Service will be held at Mount Calvary Lutheran Church in Mt. Jackson VA. At 2:00p.m. on Sunday the 15th of April, 2018 . Pastor Diehl will be officiating. Families will receive friends on Saturday April 14th, 2018 from 6:00 -8:00 p.m. at Dellinger Funeral Home in Mt. Jackson, VA. In lieu of flowers contributions can be made to Commonwealth Cares, and/ or Mt. Calvary Lutheran Church.

Goldyene Miller Harris, 86, passed away on April 11, 2018. She was born July 21, 1932 in Quicksburg, Va to the late William Harvey Miller, Sr & Julia Arlene Miller. She was preceded in death by her twin brother, Galen in 1975, and her sister,... View Obituary & Service Information

The family of Goldyene Miller Harris created this Life Tributes page to make it easy to share your memories.

Send flowers to the Harris family.