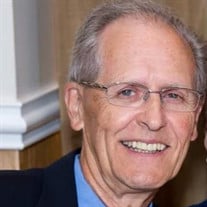 Harold Wylie Rhinehart, age 76, of Arlington, VA and Quicksburg, VA, passed away on February 18, 2019 following a brief bout with lung cancer. He was born on February 27, 1942, the son of Isaac Newton Rhinehart and Katrina Lowe Rhinehart of New Market, VA. He was preceded in death by his parents, his brother, William N. Rhinehart of Mouth of Wilson, VA, his sisters, Alma Jean Moyers of York, PA and Mary Louise Beauregard of Eunice, Louisiana and his brother-in-law Mannie Moyers of York, PA. Harold is survived by his loving wife of 50 years, Barbara Showman Rhinehart, who he married May 11,1968, his beloved daughter Angela Rhinehart Glassmeyer and her husband Steven, of Fairfax VA, and the loves of his life his two granddaughters, Grace Louise Glassmeyer and Charlotte Elizabeth Glassmeyer. He is also survived by his sister-in-law Charlsie Rhinehart of Mouth of Wilson, VA and his 10 nieces and nephews who were all very dear to him. Harold was a member of the first graduating class at Stonewall Jackson High School, Quicksburg ,VA in 1960. He enjoyed playing on the school basketball team and remained friends with team members throughout his life. He recently held a reunion gathering this group at the family farm. He served stateside in the US Army in the Vietnam War Era and retired from the Federal Bureau of Investigation after 35 years of service. Harold had a love of classic cars and enjoyed attending Mecum Auctions in Harrisburg , PA and enjoyed watching both Mecum and Barrett Jackson Auctions on TV. He was a member of Mt. Olivet Methodist Church in Arlington, VA and also attended his wife's home church, Solomon's Lutheran Church. Services will be held at Solomon's Lutheran Church, 521 Solomon's Church Road Quicksburg, VA 22847 on Saturday February 23, 2019 at 11 AM with burial to follow in the church cemetery. Family will receive friends following the service at the church. Donations in his memory may be made to the Hospice group that served him well in his last days, Capital Caring, 2900 Telestar Court, Falls Church, VA 22042

Harold Wylie Rhinehart, age 76, of Arlington, VA and Quicksburg, VA, passed away on February 18, 2019 following a brief bout with lung cancer. He was born on February 27, 1942, the son of Isaac Newton Rhinehart and Katrina Lowe Rhinehart of... View Obituary & Service Information

The family of Harold Wylie Rhinehart created this Life Tributes page to make it easy to share your memories.

Send flowers to the Rhinehart family.