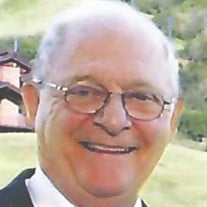 Lieutenant Colonel (retired) Herald “Hal” Franklin Stout, Jr., passed away on Thursday, July 30, 2020, at Greenfield Reflections of Strasburg, from complications of diseases caused by Agent Orange. He was born in Newport, Rhode Island on October 23, 1930 to the late Herald Franklin Stout, Sr., and the former Louise Frederica Finley, both of Dover, Ohio. He grew up as a “Navy Junior” and after two years of college at San Diego State University and George Washington University, was appointed to West Point. Herald graduated, was commissioned as a Second Lieutenant in the United States Army, and married his wife Barbara Ester Faxon all in June, 1954. His assignments took him and his family to Washington State, Alaska, Georgia, California, Kansas, Virginia, and Honduras. He served two combat tours in the Republic of Vietnam, first as an Advisor to the Army of South Vietnam, and second, establishing and developing the U.S. Army program to investigate issues of racial injustice and drug abuse. In Honduras, he was the Chief Army Advisor to the Honduran Army, and also served as the U.S. Military Group Chief. He received numerous Army awards, including the Combat Infantryman Badge, multiple Army Commendation and Meritorious Service Awards, the Bronze Star with V Device, and two Legions of Merit. Hal was an Airborne Infantry Ranger and an Honorary Member of the Armed Forces of Honduras. After retirement, he was a part-time Spanish translator in Shenandoah County Courts, and a substitute teacher in the county high schools. Hal had a lifelong affiliation with the Boy Scouts of America, was a member of the Order of the Arrow, and was a “Double Eagle,” earning his Eagle Award with Boy Scouts and the equivalent Sea Scout Quartermaster Award, both in 1948. He served on the Shenandoah Area Council Eagle Scout Board for 39 years, and in 2017 was awarded The National Eagle Scout Association’s Outstanding Eagle Scout Award. He loved good jokes (the cornier the better), spending time with his family and pet birds, building furniture, baseball, swimming, traveling, and collecting worldwide postage stamps. Herald was predeceased by his parents, his beloved son Herald Franklin Stout, III, his brother-in-law and great friend Glen S. Faxon, Jr., and his nephew Michael Stout. He is survived by his wife of over 66 years, Barbara; his daughter Lida and her husband Mark Haskett, his daughter-in-law Laura Stout, grandchildren Dennis Savonarola, Jr., James Haskett, Barbara Haskett, Emily Stout, Liza Stout, and Sara Stout; his brothers Bruce Stout (Susan) and Peter Stout (Elaine); his sister-in-law Elizabeth Faxon; nieces and nephews Beth, Carol, Robert, Natalie, Christopher, Jennifer, Mike, Howard, Ron and Barbara; his best friend for 70 years, Jack S. Chesbro (Caroline); and by all the staff and caregivers at Greenfield who grew to be family over the course of three years. Services will be private and internment will be at a later date in Arlington National Cemetery. In lieu of flowers, the family asks that any contributions in Herald’s name please be made to your favorite military veterans charities, including the Disabled American Veterans, to Parkinson’s Disease research, or to your local rescue squad. Arrangements are in the care of Dellinger Funeral Homes in Woodstock, Virginia.

The family of Herald "Hal" Franklin Stout Jr. created this Life Tributes page to make it easy to share your memories.

Send flowers to the Stout family.