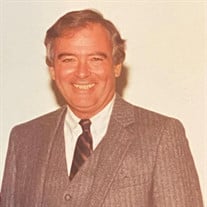 Howard Francis Roycroft III, 91, passed away at his beloved mountain retreat, Bryce Resort, Basye, Virginia on May 8, 2022. Howard was born on September 9, 1930, in Baltimore, Maryland to Bessie Weaver Roycroft and Howard Francis Roycroft II. Howard graduated from high school in the Baltimore City College class of 1949 attending college at the University of Maryland where he studied English Literature and European History. Upon graduating in 1953, Howard was commissioned as a 2nd Lieutenant in the United States Marine Corp and served in Japan and French Indochina as a member of the Fleet Marine Force Pacific. After military service, he entered Georgetown University Law School graduating in 1958. He joined the law firm of Hogan & Hartson (now Hogan Lovells), an international law firm based in Washington, DC and London. He practiced law for nearly 30 years, specializing in communications. Howard tremendously enjoyed the collegiality of his law practice. His sharp intellect, engaging wit and sense of humor contributed to his success and the success of his clients. He became a member of the board of directors of United Television, Inc. in 1982 and continued as a corporate director and consultant after his retirement from active law practice in 1986. He was a partner- owner of WIJY, a radio station in Hilton Head, SC a partner- owner of Bryce Resort and President of the Sky Bryce Association Board of Directors for a time in the late 1970’s and early 80’s. Howard embraced life with an optimism fueled by zest and zeal. He ran many marathons including two Boston marathons and was often spotted training on the mountain roads at Bryce. He loved all Bryce-related recreation – golf, tennis, skiing, horseback riding trips and received a pilot’s license and flew in and out of Sky Bryce Airport. He travelled extensively planning family trips every year to destinations in the United States and abroad. He also enjoyed boating on his 33’ Chris Craft “Seagull”. Howard is survived by his wife of 68 years, the former Barbara Lee Seal. He is also survived by his sister, Jean Moore, his children, Suzanne Soderberg (Jeff), and Nancy Roycroft, and his grandchildren, Lauren Soderberg and Kathleen Branigan. A memorial and celebration of life service will be held Sunday, May 15 at 2PM, Bryce Resort Dining Room, 1982 Fairway Drive, Basye, VA (540) 856-2121. In lieu of flowers, donations may be made to St. Jude’s Children’s Hospital.

The family of Howard Francis Roycroft III created this Life Tributes page to make it easy to share your memories.

Howard Francis Roycroft III, 91, passed away at his beloved mountain...

Send flowers to the Roycroft family.