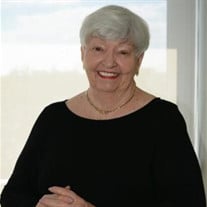 Jewell Maxine nee Stinson Emswiller was born May 5, 1936, in Arkansas the youngest of 4 children to Lee and Clara Stinson and went to be with her Lord, December 30, 2018. She met Carl Emswiller when her family moved to Jacksonville, Florida, where he was stationed with U.S. Navy. They married after a whirlwind courtship and moved, for a time, to the Naval station in Newfoundland where they learned life-values really important to them. In Richmond, Virginia, Carl received a degree in pharmacy from the Medical College of Virginia and they opened a pharmacy in Leesburg, VA, fulfilling all their dreams. They turned the pharmacy into an office practice for pharmacy, a concept they pioneered. Jewell, gave up her own career, joining Carl and becoming his full partner in business as well as in life. Their efforts to develop collaboration among health professional students and practitioners is honored by the creation of an annual symposium named for them. Its purpose is to foster increased collaboration among health care providers. Jewell served on and chaired the Loudoun County Planning Commission, the town council, and was an active member of the Rotary Club. In her spare time, she earned a degree from George Mason University. Her love for flower arranging and gardening was evident in her involvement in the Sarasota Garden Club where she was a president. Her love of photography was showcased in the Best of Loudoun 2012 Award. Jewell will be missed by her many loving friends and family. She is survived by nieces Delores Socher and Jeanette Stinson and nephews Henry and Vaughn Stinson. In lieu of flowers memorial contributions may be made to the Adler Center for Caring in Aldie, Virginia. A celebration of her life will take place Thursday, January 3, 11 am at Dellinger Funeral Home in Woodstock, VA and Saturday, January 5, 11 am at the Leesburg United Methodist Church.

Jewell Maxine nee Stinson Emswiller was born May 5, 1936, in Arkansas the youngest of 4 children to Lee and Clara Stinson and went to be with her Lord, December 30, 2018. She met Carl Emswiller when her family moved to Jacksonville, Florida,... View Obituary & Service Information

The family of Jewell Maxine Emswiller created this Life Tributes page to make it easy to share your memories.

Send flowers to the Emswiller family.