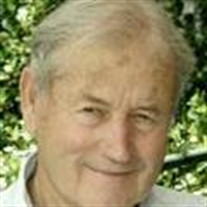 John Beverly Miller, 87, passed away on the summer solstice of 2018 in the small town of Nieder Eschbach on the outskirts of Frankfurt, Germany. He was born in Mount Jackson, Virginia, in the small tenant house on the south end of the grand old house of the late J.W.R Moore November 16, 1930 to the late Mildred Virginia Bowman Miller and Paul Eugene Miller, both of Mount Jackson. He put his education on hold after seventh grade to help support the family, and then enlisted early in the U.S. Army in 1948. He rose quickly through the ranks and received special training as a surveyor. His years in the Army took him around the world, from Germany, where he met his first wife, Ingrid Lotte Rolf, to Taiwan, all over the USA, to Japan where his son, Scott, was born, to Iran where Ingrid preceded him in death in 1966. Upon their return to Germany, he met his wife, Slavica Papa, whom he credits with turning his life back around. Shortly after, he retired from the U.S. Army as a Warrant Officer with 25 years and a day under his belt. The family returned to Mount Jackson. John continued his career as a surveyor at the Shenandoah National Park, and daughter, Sonia, was born in Harrisonburg, Virginia. Several years later, once Scott was established at college, the rest of the family returned to live in Germany. John completed 26 years, five months and 22 days in civil service, this time as part of the Corps of Engineers where surveying trips would take him to Italy, Turkey, Holland, Luxembourg, Albania, and throughout the Middle East. John continued his education and attended Penn State University, as well as the University of Maryland. He had a love of Mercedes Benz cars, fine food, good jokes, a day in the sun, and was an avid learner all his life. He shared his wonder of the stars and planets, and sought to instill a value of the world around us and the lives that inhabit it. John is survived by his wife, Slavica of Nieder Eschbach, Germany; his son, Scott and wife Patricia of Fredericksburg, Virginia; his daughter, Sonia and sweetheart William of Stoneham, Massachusetts; as well as granddaughters, Taylor and Madelyn, both of Fredericksburg, Virginia. Also surviving him are his siblings, Mildred Miller of Edinburg, Virginia, Frank and wife Jeanette Miller of Mount Jackson, Virginia, and Nannette Miller, of Mount Jackson, Virginia; as well as many beloved nieces, nephews, and grandnephews and grandnieces. He is preceded in death by his siblings, Vera Emily Miller Woodzell, Richard Deyerle Miller, and Edward Newham Miller. Services will be announced at a later date, once John has returned to the valley he called home.

John Beverly Miller, 87, passed away on the summer solstice of 2018 in the small town of Nieder Eschbach on the outskirts of Frankfurt, Germany. He was born in Mount Jackson, Virginia, in the small tenant house on the south end of the grand... View Obituary & Service Information

The family of John Beverly Miller created this Life Tributes page to make it easy to share your memories.

John Beverly Miller, 87, passed away on the summer solstice of...

Send flowers to the Miller family.