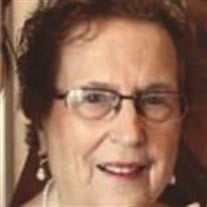 June Raynes Mathias, 90 of New Market passed away May 16, 2020 at Shenandoah Terrace. She was born November 23, 1929 near McGayhesville, the daughter of the late George Washington Raynes and Beula Morris Raynes Royer. She was a graduate of Port Republic High School. On May 22, 1948 she married Warren (Doc) Mathias at Grace Memorial Episcopal Church at Lynnwood. The newlyweds settled in New Market where Doc and brother Charles (Ed) had launched Mathias Brothers, a custom farming business. June often worked with Doc, operating farm equipment and later bookkeeping as the business expanded to livestock feed and fertilizer. She found a new purpose outside their home, once their youngest child started school, as an elementary teacher's aide, specializing in reading. She worked at New Market, Ashby-Lee and WW Robinson elementary schools in Shenandoah County until her retirement in 1995. June was a faithful and active member of Manor Memorial United Methodist Church where she was a 40+ year choir member. June's interests were centered close to home. First and foremost was her unconditional devotion to the love of her life, Doc. They were high school sweethearts, separated during WWII, but rarely apart during their 72-year marriage. The pair spent many Saturday nights with dear friends whom they met while square-dancing with the Turkey Trotters. Early in their marriage, June was an accomplished seamstress, providing clothing for herself, her daughters and nieces. Later years found her crocheting afghans that found themselves at the foot of every grandchild's bed. Summers were spent planting and harvesting the bounty from her vegetable garden. Canning season ceased only when all the jars were filled and family members were recruited to help on "corn day". A great joy for June was seeing filled plates and grandchildren sitting around her kitchen table. Fourteen-day pickles, Halloween popcorn balls and Christmas turtles and fudge were time consuming to make, but she relished in her reward of smiles and hugs from those she loved. June was preceded in death by her brother, Gary Royer. In addition to her husband, she is survived by three children, Linda and husband Don Driver of Timberville, Chuck Mathias of Timberville and friend Debbie Mason, Donna and husband Tom Linski of New Market; seven grandchildren, Chad (Missy) Mathias, Ashley (Jasmine) Driver, Chris (Karena) Mathias, Anne Whitney (Kevin) Flint, Katelyn (Joshua) Carpenter, Kyle (Liz) Linski, Kelsey (Daniel) Sigala; ten great-grandchildren; two sisters, Sandra Kee and Karen Monger. A private graveside service will be held at Emmanuel Lutheran Church Cemetery. A celebration of life will be held at a later date. Memorials may be made to the charity of your choice.

June Raynes Mathias, 90 of New Market passed away May 16, 2020 at Shenandoah Terrace. She was born November 23, 1929 near McGayhesville, the daughter of the late George Washington Raynes and Beula Morris Raynes Royer. She was a graduate of... View Obituary & Service Information

The family of June Raynes Mathias created this Life Tributes page to make it easy to share your memories.

Customized sympathy cards. Mailed for you.