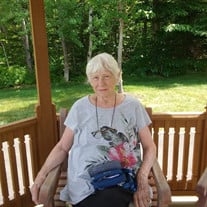 Kathryn Estelle Nathan February 4 th, 1934 – November 24 th, 2019 Kathy passed away peacefully November 24 th, 2019 following a brief battle with cancer. Her eldest daughter Karen was by her side as she joined her husband David…. Kathryn Estelle Marcotte was born in Langdon, ND on February 4 th, 1934, the second of three children, to Charles A. and Lucille McKowen Marcotte. She grew up and was educated at the local schools in town. Mom was a true trailblazer and a woman ahead of her time. After graduating salutatorian of Langdon high school in 1951, she moved to Minnesota to attend St Benedicts College (interrupted by a move to California for a year—the first gap year ever!). After graduating in June 1957 with a bachelor’s degree in Social Science, mom got on a Greyhound bus with a few girlfriends and headed to Washington DC, where she worked and lived in the city with her friends until marrying our father, David Shaffron Nathan, on May 28, 1960. After marriage, Dave and Kathy lived in Washington, DC until their growing family moved them to progressively larger houses in the suburbs – first in Forest Heights, MD, and then to Temple Hills in 1971, where they raised their 7 children. It was a noisy, but fun filled home. Mom was a homemaker as we were growing up but found time to be politically active in the local Democratic Party, school board, working at the polls during elections and overall being a very community driven advocate along with her husband. Once Stef, the youngest, was in kindergarten, mom went out into the work force and was a bookkeeper for many businesses in Alexandria, VA—braving the Woodrow Wilson Bridge back in the day when it was scarier than it is now! After Dave’s retirement from the Federal Government, mom and dad moved to New Bern, NC where they opened a donut shop called The Donut Café, which mom basically ran with her son Geoff and youngest daughter Stef, getting up at 2am to “make the donuts”. The house was frequently full of family which the two enjoyed immensely. While there, she was instrumental in the publication of a children’s coloring book about the local history of New Bern and overall stayed active in the community. After Dave’s passing in 2003, Kathy relocated to Hallowell, ME in 2005 to be near her daughter Debra and help raise her grandson Ben—who has fortunately inherited all the good parts of his “Mema.” She loved the town of Hallowell and soon became known to many of the residents as “Mema”. In May of this year, she moved a final time to Woodstock, VA, where she cherished visits from family and the scenic beauty of the Shenandoah Valley. Kathy is preceded in death by her parents, brother Vincent, and husband David. She is survived by her children Karen (Gary), Geoff (Christine), twins Lisa and Karla (Andy), Becky, Debra, and Stefanie (Melissa); grandchildren Amanda (Carlos), Emilee, Alexandra, Henry, and Ben, and her brother Duane and sister-in-law Renee. The family would like to thank the staff at Greenfield Reflections in Woodstock, and Blue Ridge Hospice for the amazing care provided to mom the last weeks of her life. A memorial service will be held on 3pm, Saturday, November 30 th at Dellinger Funeral Home in Woodstock, VA. There will be gathering following the service at the home of her oldest daughter, Karen. In lieu of flowers, donations may be made to Blue Ridge Hospice in Winchester, VA or Bread for the City in Washington, DC.

The family of Kathryn Estelle Nathan created this Life Tributes page to make it easy to share your memories.

Send flowers to the Nathan family.