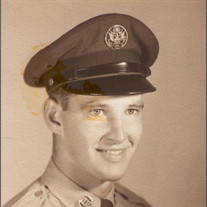 Keith Bowers, 88, of Woodstock passed away peacefully Tuesday, June 9, 2020 at Greenfield of Woodstock. A private Graveside Service (due to the Covid-19 pandemic) will be held on June 19, 2020 at the cemetery in Mount Jackson. The Reverend Glen Early will officiate. When in the future it is deemed safe to gather in community, the family will hold a public memorial service. Keith was born on March 11, 1932 in Jerome. He was the son of the late Berlin Stanley Bowers and Elizabeth Heishman Bowers. As a young man, he served first in the Virginia National Guard at Harrisonburg, and subsequently in the Air Force during the Korean Conflict. While stationed in Japan, he performed maintenance on some of the Air Force’s earliest jet aircraft. Upon his honorable discharges, he began work as a machinist, working for Melpar, Airtronics, and Vega Precision Laboratories during a 37-year career. He built prototypes fitted with electronics that were developed under contracts from NASA and the Department of Defense. He was highly skilled in the use of mills, lathes, drill presses, grinders, and CNC. When he retired, he turned his skills to renovation and remodeling of his wife’s family home. He was a member of Columbia Furnace United Methodist Church. He had a deep Christian faith and read the Bible daily. He had a deep sense of fairness, of right and wrong, and a strong work ethic, which he instilled in his children. He was loyal, faithful, friendly, and kind. He was preceded in death by his wife, Grace Sine Bowers, three sisters, Evelyn Bowers, Peggy Ann Bowers and Elvira Constance (Connie) Bowers, his sister-in-law Jean Funkhouser, and his brothers-in-law Bobby Layman, Donald Anderson, and Hope Funkhouser. He is survived by two sons, Daryl Keith Bowers and Earl Maxwell Bowers and his wife Nena; a daughter, Gail Bowers Dawson; two sisters, Selma Bowers Anderson and Martha Bowers Layman Old and her husband Art, and two brothers, Everett Bowers and his wife Janet and Dwight Bowers and his wife Charlene. In lieu of flowers, donations can be made to the Woodstock Rescue Squad.

Keith Bowers, 88, of Woodstock passed away peacefully Tuesday, June 9, 2020 at Greenfield of Woodstock. A private Graveside Service (due to the Covid-19 pandemic) will be held on June 19, 2020 at the cemetery in Mount Jackson. The Reverend Glen... View Obituary & Service Information

The family of Keith Bowers created this Life Tributes page to make it easy to share your memories.

Send flowers to the Bowers family.