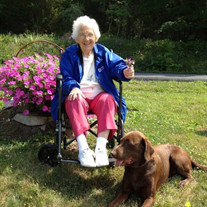 Lorene Binsted, 97, passed away January 4, 2021. Lorene Almeda was born November 28, 1923, in Baltic, OH, the 7th of 9 children to Vesta and Carl Richardson. After graduating from high school, Lorene completed cosmetology school and with her sister, Freda, moved to Washington, DC. There she met a handsome Marine Sargeant named Johnny Binsted. They wed in December 1945 and settled into The Georgetown House, raising four children there. Church was a family affair, and Lorene was an active member at Capitol Hill UMC where she sang in the choir and served in the nursery alongside her sister, Shirley, who had moved to DC and married Johnny’s brother, Tommy. In her 40’s, Lorene took the Civil Service Exam and began a career in government, working for two US Congressmen and later at the Department of Agriculture. She also began her career as Grandma/Bummie/Gramio, welcoming the first 6 grandchildren, and then 13 years later, a trio who brought joy to her retirement years. Lorene and Johnny spent their retirement years in Jerome, VA, at The Farm. Gardening and sweeping the porch kept her busy at their “fixer upper” and Saturday morning yard sales helped her furnish it. Ever the industrious woman, Lorene and her best friend, Florence, opened The Hodge Podge Shop in Woodstock, VA. They took the business model of “giving it away” literally, so the venture did not last long, but they made a name for themselves and had many friends in town! Lorene was a scratch cooker bar none. She read the Bible for the edification of her soul, she loved music – especially hymns, and her favorite saying was, “Oh, for heaven’s sake”; we are confident she is there today. She is survived by her children: Cheryl Lynn, Tom (Paula) Binsted, Norman (Mary Margaret) Binsted, and Joni Binsted; grandchildren: Travis (Mary) Sibley, Jon Binsted, Jenny (Jeff) Mallat, Lia DeLucchi, Chad (Heather) Leonard, Spring Binsted, Kasey Binsted, and Seth Binsted; ten great-grandchildren; two great-great grandchildren; along with many nieces and nephews who loved Aunt Lorene. She was preceded in death by her husband of 45 years, John Norman Binsted; grandsons Kyle Lehan Leonard and Tyler Jay Binsted; her parents, and her siblings. A visitation will be held Friday, January 8 from 3:00-5:00 pm at Dellinger Funeral Home, Woodstock, VA. An outdoor graveside service will be held Saturday, January 9 at 11:00 am at St. Paul’s Lutheran Church, Jerome, VA.

Lorene Binsted, 97, passed away January 4, 2021. Lorene Almeda was born November 28, 1923, in Baltic, OH, the 7th of 9 children to Vesta and Carl Richardson. After graduating from high school, Lorene completed cosmetology school and with her... View Obituary & Service Information

The family of Lorene Binsted created this Life Tributes page to make it easy to share your memories.

Send flowers to the Binsted family.