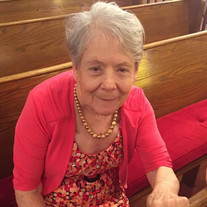 Pauline Frances Dellinger Weatherholtz, 81, of Edinburg, died Thursday, August 1, 2019 at Skyline Terrace Nursing Home in Woodstock. She was born January 22, 1938 in Conicville, daughter of the late Garnet Raymond and Fleta Lee Wolfe Dellinger. She was a graduate of Edinburg High School. She was a member of St. Jacob’s Lutheran Church in Edinburg and a former employee of Shenandoah Memorial Hospital. Mrs. Weatherholtz was preceded in death by her husband, Kenneth Eugene Weatherholtz. She is survived by a daughter, Kelly Hepner of Murfreesboro, Tennessee; two sisters, Lena Wilkins and Anna Funkhouser both of Mt. Jackson; three granddaughters, Jordan Leigh Hepner of Jacksonville, Florida, Camryn Elizabeth Hepner of Freeport, Florida and Jensen Alys Hepner of Defuniak Springs, Florida as well as numerous nieces and nephews. In addition to her parents and husband, she was preceded in death by her twin brother, Paul, brothers, Raymond, Garnet and Garland Dellinger, and a sister Madeline Wilkins. The funeral service will be held Monday, August 5, 2019 at 11 a.m. at St. Jacob’s Lutheran Church with Rev. Katie Gosswein officiating. Burial will follow at Conicville Cemetery. The family will receive friends Sunday from 6 to 8 p.m. at the Dellinger Funeral Home in Mt. Jackson. Memorial contributions by be given to St. Jacob’s Lutheran Church, P.O. Box 175, Edinburg, VA 22824.

The family of Pauline Frances Dellinger Weatherholtz created this Life Tributes page to make it easy to share your memories.