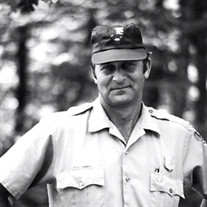 Ralph “Mike” Gochenour, 84, of Maurertown passed away Thursday, August 8, 2019 suddenly on his farm along The Shenandoah River near Maurertown, VA. Ralph was born January 2, 1935 in Maurertown, VA. He was the son of the late John Wilbur and Jessie Beatley Gochenour. Ralph “Mike” was a graduate of the Woodstock High School Class of 1953 and often told tales of riding his horse to school. He attended Berea College in Berea, Kentucky where he lived in Guest House, known as the champions of intramural sports and worked as a bellhop at Boone Tavern to help fund his education. Prior to graduating, Ralph returned to Shenandoah County due to his father’s poor health and ran the family’s massive farm on the north end of Woodstock. He began his 26-year career with the United States Department of Interior in 1969 as a part-time back country ranger on Skyline Drive and eventually retired from there as the supervisor of Mathews Arm Campground. During these years with The Shenandoah National Park, he continued his beef cattle farm operation and operated Native Woods Lumber Mill, providing firewood, custom lumber, and more for many local crafters, builders and furniture makers. His hobbies included milling native hardwoods, fishing, making fine crafts, picking walnut kernels and searching for Native American artifacts on his ancestral land with his grandson. He was especially proud of having sawn the timber to build his family home on Sawmill Lane. He was preceded in death by his wife, Bonnie Bryant Gochenour and 2 brothers, Harold and William Gochenour. Ralph is survived by 3 sons, Larry Michael Gochenour (Cena Hubbell) of Toms Brook, VA, Gary Lee Gochenour (Tracie) of Manassas, VA and Matthew Paul Gochenour of Maurertown, VA; a daughter, Kelly Gochenour Phillips (Blake) of Woodstock, VA; 2 grandchildren, Hunter Phillips of Maurertown, VA and Meredith Phillips of Woodstock, VA; companion, Betty Jean Clifton, of Stephens City, VA; a brother, John W. Gochenour of Woodstock, VA; 2 sisters, Judy Shirkey (Henry) of Edinburg, VA and Linda Wilkins (Mike) of Woodstock, VA; 2 sisters-in-law, Jill Gochenour of Woodstock, VA, Dixie R. Gochenour of Jerome, VA and numerous nieces and nephews. The family will receive friends on Sunday, August 11 from 7 PM to 9 PM at The Valley Pike Church of the Brethren at 83 Headley Road in Maurertown, VA. The funeral will also be held there at the church on Monday, August 12 at 2 PM followed by interment in the church cemetery among multiple generations of his family. In lieu of flowers, donations may be made to the Bonnie B. Gochenour Memorial Scholarship Fund C/O Shenandoah Community Foundation, P.O. Box 31, Woodstock, VA 22664.

Ralph &#8220;Mike&#8221; Gochenour, 84, of Maurertown passed away Thursday, August 8, 2019 suddenly on his farm along The Shenandoah River near Maurertown, VA. Ralph was born January 2, 1935 in Maurertown, VA. He was the son of the late John... View Obituary & Service Information

The family of Ralph "Mike" Gochenour created this Life Tributes page to make it easy to share your memories.

Send flowers to the Gochenour family.