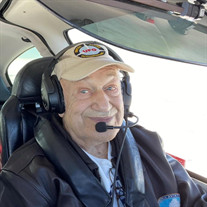 Richard (Dick) George D’Antonio, 91, of Basye, passed away Sunday, March 6, 2022. Visitation will be Thursday, March 17 from 6-8 PM. at Dellinger Funeral Homes, Woodstock. A Funeral Mass will be held at 11:00 A.M. on Friday, March 18, 2022, at Our Lady of the Shenandoah, Basye, VA. Burial will be at a later date at Arlington National Cemetery. Dick was born on September 27, 1930, in New Rochelle, New York to the late Frank and Gladys D’Antonio. Raised in Brooklyn, he graduated from Brooklyn Technical High School and went on to earn a bachelor’s in electrical engineering with a specialization in Communications from The Polytechnic Institute of Brooklyn ’52 (now NYU Tandon). Early in high school, he built his own radio, got his ham radio license and enjoyed talking with people all over the world. With his parents’ permission, he enlisted in the Navy Reserves at 17 because he wanted to take the electronics classes they offered. After graduation from Brooklyn Poly, he went to OCS and then was called to active duty. He served as a navigator and maintenance officer on several aircraft carriers deployed in the Mediterranean. Upon discharge, he then took a civilian job working for the Department of the Navy in the Strategic Systems Project Office. For the next 35 years, he worked as an engineer in the Polaris, Poseidon and Trident submarine programs responsible for the specification and supervision of the development of fire and safety control systems for launching missiles. In addition to this, he remained in the Navy Reserves for a total of 30 years of service. Dick was an avid private pilot since getting his license in 1954, belonging to several flying clubs through the years. He was a member of the United Flying Octogenarians and flew left-seat to Jacksonville this past Christmas (there was another pilot in the right seat!). He was a lifelong member of the Knights of Columbus. Known as Pop Pop to quite a number of younger skiers at Bryce, he was a 30+ year member of the National Ski Patrol at Bryce Ski Resort as well as a Professional Ski Patroller. He was a nationally ranked NASTAR racer both on snow as well as grass skiing. Amazingly, he skied his last run at age 90. He is survived by his children, Audrey Alderman (Craig) of Winchester, Mike D’Antonio of Sunnyvale, CA and daughter-in-law Elisa D’Antonio of Rockville, MD. He has five grandchildren: Danielle Alderman of Neptune Beach, FL, Alan Alderman of Thomasville, GA, Colin Alderman of Seattle, WA, Ryan D’Antonio of Dover, DE, Denise D’Antonio of Washington, DC, one great-grandchild, Vera Baker of Neptune Beach, FL and brother, Bill D’Antonio of Manhasset, NY. He is pre-deceased by his wife of 60 years, Maria D’Antonio, their son, Robert D’Antonio and brother Dave D’Antonio. Dick never met a stranger, always lent a hand to someone in need and had an endless wealth of his amazing stories and adventures to tell. To say he will be missed is an understatement. In lieu of flowers, a memorial contribution may be made to The Airport Fund, c/o Bryce Resort, PO Box 3, Basye, VA 22810 https://bryceresort.com/information/sky-bryce-airport or The Blue Ridge Area Foodbank, P.O. Box 937, Verona, VA 24482-0937 https://www.brafb.org/give-now/.

The family of Richard "Dick" George D'Antonio created this Life Tributes page to make it easy to share your memories.

Send flowers to the D'Antonio family.