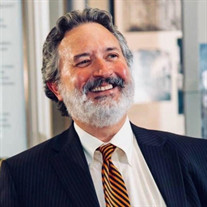 Scott Esten Hendley, 54, of Alexandria, VA, passed away peacefully, but unexpectedly, from cardiac arrest on the evening of Monday, March 16, 2020. He was an Alexandria resident for 29 years. Scott was born on August 20, 1965 in Tyler, Texas. He was the youngest of three sons born to William Esten (aka Buddy) and Mary Elaine Hendley. Scott graduated from the University of Texas at Austin where he received a bachelor’s degree in Government, and master’s degree from the LBJ School of Public Affairs at UT Austin. Scott is survived by the lights of his life, who will dearly miss him: his wife, Renée, and their children, Nathaniel and Kathryn (Katya). He is survived by his older brother, Dane, his wife, Sharon Rose, and their son, Grant Hendley, of Tyler, Texas. His parents, William Esten and Mary Elaine Hendley, and his oldest brother, Michael, preceded him in death. Scott was hired directly out of graduate school by the U.S. Department of Justice (DoJ) as a Presidential Management Intern, proudly telling us all he wanted to become a bureaucrat! His career spanned 30 years where he rose to become the Associate Director of Policy at the Office of Policy and Legislation within DoJ’s Criminal Division. Scott was an exceptional public servant whose career spanned more than 30 years as a policy analyst supporting Attorneys General Richard Thornburgh, William Barr, Janet Reno, John Ashcroft, Alberto Gonzales, Michael Mukasey, Eric Holder, Loretta Lynch, Jeff Sessions, and William Barr again on a broad range of strategic policy issues. • In the 1990s, Scott researched, and developed strategies related to organized crime in the former Soviet Union – this work was used to develop a 2004 comprehensive guide on Russian Money Movements. • In the early 2000s, Scott’s research and strategies helped to identify sources of terrorist financing – this work later served as a user’s guide for federal prosecutors. • After the 2012 Sandy Hook Elementary School shooting, Scott worked with a team to draft an award-winning study that involved developing recommendations on gun control policy. • Scott also was on a task force charged with working collaboratively with Mexican officials to assess and develop policy related to drugs, firearms and explosives trafficking. In his free time, Scott wrote feature wine reviews for the Shenandoah Valley’s Mountain Courier and the Alexandria Times before establishing the National Wine Review as an independent online publication in 2012. He recently joined the team at Alexandria Living Magazine, where he highlighted the attributes of Virginia wines. Scott was a self-described “equal opportunity” wine taster and tasted and evaluated wines from around the world but he held a special affection for California wines, especially along the Sonoma Coast. Scott and his wife, Renée (also a graduate of the LBJ School of Public Affairs), were married in Austin, Texas, in 1990 and were blessed to share 30 incredible years together. Scott was a deeply loving and devoted husband and a wonderful and present father -- the big-hearted, foundational rock who loved his family more than anything. Scott and Renée raised two kind and thoughtful children together in Alexandria, VA. His daughter, Kathryn, graduated with a Bachelor’s and Master’s degrees in Urban Planning from the University of Virginia and is working in Baltimore. His son, Nathanial, is a senior in high school and will attend the Savannah College of Art and Design (SCAD) to study television and film production. Scott and Nathaniel shared a passion for good film making and watched countless movies together. Scott encouraged Katya to buy her first house over a glass of dark beer in a Belgian beer hall. He cooked many gourmet meals in her new kitchen before retiring to the basement for a night of horror films with Nathaniel. Scott supported Nathaniel’s dream of becoming a filmmaker, touring film schools across the country, providing thematic inspiration for short films, and serving as a supporting actor in Nathaniel’s productions. Scott and his family enjoyed many joyful times at their vacation home in Virginia's Shenandoah Mountain. Family-loved activities include biking, hiking, fishing, and toasting friends and family with a nice bottle of wine and epic meals. Scott Hendley knew how to enjoy life. He greeted the world with a smile and a twinkle in his eyes. A lover of travel and discovery, his was a generous spirit through whom encouragement, support, delicious food and wine flowed freely to all who had the good fortune to know him. A connoisseur of many fine things, his favorite pastime was discussing wine. Scott was known as a wine super-taster, and had the fine art of teaching all who were interested about the 4 Wine Senses (Sight, Smell, Taste, and Touch) so that more people could appreciate all kinds of wine as he did. These are precarious times when we’d like to make a difference when we can. During the current conditions of the COVID-19, his family kindly requests all to please consider making offerings in Scott Esten Hendley’s name to the Fisher Center for Alzheimers Research Foundation Like many of us, Alzheimer’s runs in Scott’s family. Scott’s mother, Mary Elaine (who was a lot like Scott, extremely generous, funny, and knew just what to do in such situations) died of Alzheimer’s disease. Because of the COVID-19 virus, we can't hold a public memorial right now. We will come together to celebrate his life as soon as we are permitted to do so.

Scott Esten Hendley, 54, of Alexandria, VA, passed away peacefully, but unexpectedly, from cardiac arrest on the evening of Monday, March 16, 2020. He was an Alexandria resident for 29 years. Scott was born on August 20, 1965 in Tyler, Texas.... View Obituary & Service Information

The family of Scott Esten Hendley created this Life Tributes page to make it easy to share your memories.