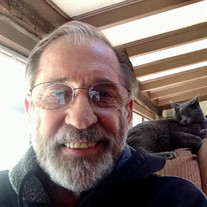 Stephen Michael Hattman, a prolific screenwriter and television producer, was born May 14, 1945 in Mansfield, Ohio and escaped at the first opportunity to attend Harvard where he earned a bachelor's degree in History. His experience as a post-graduate student at Georgetown University convinced him he could avoid gainful employment by enlisting in the Peace Corp for two years and serving in India. While there he learned to speak Hindi, developed a taste for curry, filed stories for the Associated Press and realized his true ambition was to be a writer. Returning to the states, Steve moved to Los Angeles where he was soon steadily employed on hit shows like Diagnosis Murder, Spenser for Hire, A Man called Hawk, Scarecrow and Mrs. King, Harper Valley PTA, The Love Boat and The Magnificent Seven. Steve was always the smartest person in the room, a skilled card player and a sweet swinging seven handicap at his second home, Lakeside Golf Club. Steve was funny. An understatement, indeed. He was one of the most talented and naturally funny humans you will have the delight to come across. Just ask the legions of humans he has come across. Brilliant, clever, ready witted, irreverent, he spoke comedy the way Miles Davis played notes. And he used his comedy for good. He loved to make people smile. And not just smile, but a full-on belly laugh was his real target. However his wit landed on you, he left you feeling good, happy. Through his eyes you saw life's absurdities. He not only changed your mood, but your perspective. And his one and only requirement was you had better be prepared to laugh at yourself. Retiring to Mount Jackson, Virginia, Steve, the life long Civil War historian was in his element. Surrounded by battlefields and historic architecture, he would happily recount for you what battle was waged here, what Lee and Grant were doing there as precisely and colorfully as if he was reporting from the battlefield himself. One house, where he lived, was occupied by a young surveyor, George Washington, who slept there for a fortnight. (Really) He is survived by his children, William Atkinson Hattman and Susan Turner of Portland, Oregon and the true love of his life, his own blessed angel and devoted companion, Suzanne Porter. Steve believed in the words of one of his favorite authors, Rudyard Kipling, when he said, "This is a brief life, but in its brevity it offers us some splendid moments, some meaningful adventures." In Steve's life, he gave us all a full measure of both. Celebration of Life for Stephen will be private.

Stephen Michael Hattman, a prolific screenwriter and television producer, was born May 14, 1945 in Mansfield, Ohio and escaped at the first opportunity to attend Harvard where he earned a bachelor's degree in History. His experience as a post-graduate... View Obituary & Service Information

The family of Stephen Michael Hattman created this Life Tributes page to make it easy to share your memories.

Send flowers to the Hattman family.