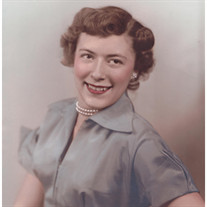 Thelma I. McClanahan Mathias, 84, who went to be with our Lord on Monday, December 3rd, 2018 at Consulate Health Care of Woodstock. The family will receive friends Thursday, December 6 , 2018 from 6-8 at the funeral home. Burial will be private in Massanutten Cemetery in Woodstock. Pastor Angela LaTourette Dunn will officiate. Thelma was born August 2, 1934 in Fort Valley, VA. She was the youngest child of the late Mertie and Maude Clem McClanahan. She retired from James Wood High School cafeteria staff in July 1992. She was a former member of Little Mountain United Methodist Church in Frederick County, VA but raised with Lutheran Faith. Thelma was well known for her love of baking and cooking. With her self-taught cake decorating skills, she made and sold all different themes, shapes, sizes of cakes and galore of Christmas cookies and pies. With the proceeds from her sells, she managed to save enough money so she could purchase a car and learn to drive on her own. While at Consulate, she baked goodies to raise funds for the American Cancer Society and for supplies in Consulate's resident's kitchen. She had been a resident of Consulate Health Care in Woodstock since 2004. She struggled with Parkinson disease since 1980 for 38 years. She was diagnosed with breast cancer in 1983 and was a 35 year cancer survivor. On March 15, 1952, she was married to Derwood B. Mathias who preceded her in death on June 30, 2006. She was also preceded in death by her siblings Evelyn Plauger Lichliter, David McClanahan, Sr., and Ralph McClanahan. Thelma is survived by three daughters and one son; Peggy Ann Judy and husband, Earl of Stephens City, Joyce Pulliam Plummer and husband, Clarence of Stephens City, Patsy Estella Evans and husband, Michael of Timberville; Dan Howard Mathias and wife, Angela of Newport, VA.; two sisters, Elsie Nelson and Mary Ann Huffman; a brother, Howard McClanahan; four grandchildren, Nicholas Judy, Lynn Evans, Jeremy Evans, Hunter Mathias and several nieces and nephews. In lieu of flowers, memorial contributions may be made to Blue Ridge Hospice, 333 W. Cork St., Unit 405, Winchester, VA 22601-3876 or to the Faith Lutheran Roof Fund, PO Box 132, Fort Valley, VA 22652-0132. Please make checks out to Faith Lutheran Church and notate roof fund in memo line. Arrangements are in the care of Dellinger Funeral Home in Woodstock. Online condolences may be sent to the family at www.dellingerfuneralhome.com. .

Thelma I. McClanahan Mathias, 84, who went to be with our Lord on Monday, December 3rd, 2018 at Consulate Health Care of Woodstock. The family will receive friends Thursday, December 6 , 2018 from 6-8 at the funeral home. Burial will be private... View Obituary & Service Information

The family of Thelma McClanahan Mathias created this Life Tributes page to make it easy to share your memories.

Thelma I. McClanahan Mathias, 84, who went to be with our Lord...

Send flowers to the Mathias family.