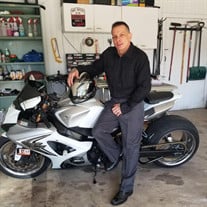 Thomas Williams, 45 of Harrisonburg passed away on Saturday, April 10, 2021. A Graveside Service will be at 3:00 P.M. on Friday April 16, 2021 in Mt. Jackson Cemetery. Reverend Tony Hiles. Will officiate. Thomas was born on November 4, 1975 and was the son of the late Richard Williams, Sr., and Barbara Klotz Williams. Tommy was a very hard-working man that loved his family. His kids and grandkids were his pride & joy. Along with his dog Bella, she was his sidekick. He always went above and beyond for everyone except himself. He was a giving person, the type of person to give his shirt off his back for anyone. No matter what or where, he would be there. Through many ups and downs, he had never let anything keep him down. One of his favorite sayings were "Never problems, only solutions." When he was not nicely dressed and smelling good, he was usually in uniform working. There was not anything he could not fix. Everything he touched turned to gold. He was a mechanic at Nissan for 16 years. Often seen running to the gym on his lunch break. Then right back to work he went. Once done for the day at work he would then go home to his garage and work some more. After turning wrenches all day, he would see what he could do around his house, like polishing his floors and up keeping his yard. He was so proud of his home. It meant so much to him. He loved to ride his bikes when he could even if it were just through town. Tommy was "that guy" And he will be deeply missed. He is survived by 3 daughters, Chelsea Whetzel, Alexus Williams, and Aliyah Williams; a son, Brody Williams; 7 grandchildren and 5 siblings, Richard Williams, Jr., Tina McCann, Kelly Williams, Julie Anderson, and Shirley Flowers. His significant other Iris Delisse.

The family of Thomas Williams created this Life Tributes page to make it easy to share your memories.

Thomas Williams, 45 of Harrisonburg passed away on Saturday,...

Send flowers to the Williams family.