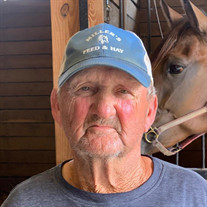 Harness racing driver and trainer Winston Lineweaver, 78, passed away Thursday, September 23, 2021. He was born October 17, 1942, in Conicville, Virginia, and was the son of the late John and Ruth Hottle Lineweaver. He was preceded in death by 3 siblings, Doris Kibler, Bruce A. Lineweaver, and Ray Lineweaver. Mr. Lineweaver competed at the nearby Shenandoah County Fair harness meet for decades and at the Shenandoah Downs pari-mutuel meet since it began in 2016. Mr. Lineweaver, who had 1628 victories in his driving career and had eighteen seasons when his UDR was above .300, was from a family which turned out many participants in the harness sport; his brother Alvin joined him in the 1000 Wins Club with 1239. Mr. Lineweaver was a second-generation horseman, and is survived by his wife Elieen, who trained horses with him, his daughter Joyce (Wayne Long), a long-time harness trainer based in Delaware and Pennsylvania, and another daughter Doris (Lee Hepner), who is the Director of Racing at Shenandoah Downs and is one of the few female racing secretaries in the industry. Mr. Lineweaver's grandchildren, Weston, and Maggie Copp, also are involved and help prepare and service the Shenandoah barn area for horsemen upon arrival and Wyatt Long who parade marshaled during the American Cancer Society Pink Power event at Shenandoah. He is also survived by a sister, Sue Lineweaver and a brother, Alvin Lineweaver. A member of the USTA since 1962, Mr. Lineweaver primarily campaigned at the various Mid-Atlantic pari-mutuel tracks and drove extensively at the Pennsylvania fairs. When racing revived in his native state in 1998, he participated at Colonial Downs and more recently, at the races in Woodstock. A pair of cardiac incidents, one in June 2012 at the Wattsburg (PA) fair and the other in October 2016 at Shenandoah (in the latter of which he drove against his brother Alvin), caused him to drastically reduce his schedule, but he was still around the barn, helping out and enjoying his family. In 2020, Mr. Lineweaver returned to the sulky for just the second time since 2016 for the career debut of Hillbilly's All In, owned by family friend Ellen Warren of Marydel. He guided the son of Rusty's All In to a fourth-place finish and just two days later, led the gelding to a runner-up finish. He drove Hillbilly's All In three more times at the '20 Shenandoah Downs season, his final career starts in the bike. As fate would have it, Hillbilly's All In competed Saturday (Sept. 25) in Woodstock and prevailed in a $5,250 conditioned pace --- the 3-year-old's first pari-mutuel win --- which occurred just two days after Mr. Lineweaver passed. The winning connections commented that the win was "For Winnie". Memorial contributions can be made to the Harness Horse Youth Foundation at HHYF.org or by mail at 2711 Friar Tuck Road, Anderson, IN 46013.

Harness racing driver and trainer Winston Lineweaver, 78, passed away Thursday, September 23, 2021. He was born October 17, 1942, in Conicville, Virginia, and was the son of the late John and Ruth Hottle Lineweaver. He was preceded in death... View Obituary & Service Information

The family of Winston Lineweaver created this Life Tributes page to make it easy to share your memories.

Send flowers to the Lineweaver family.