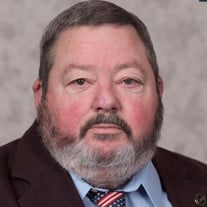 John Richard “Dick” Neese, 71, of New Market, and longtime Shenandoah County Supervisor passed away Saturday morning, November 28, 2020. He was born June 10, 1949 at the Henkel Maternity Hospital in New Market and was the son of the late John Neff Neese and Helen Breeden Neese. Dick graduated from Stonewall Jackson High School and Triplett Tech in Mt. Jackson. He served in the U.S. Army and the National Guard. He had been semi-retired after working in various positions within the food production industry. Dick had also worked part time for New Market Exxon and Narrow Passage Press. Dick was elected to his first term on the Board of Supervisors in 2002 representing District 1 on the board. He was currently serving as board chairman. Ironically, Dick’s father, the late John N. Neese served the district in the same capacity as a member and board chairman some 40 years ago. Dick, like his father, was a dedicated community and civic leader and will be greatly missed by all who knew and worked with him. He was a member of St. Martin Lutheran Church west of New Market, where he had served on the church council. He was also a member of the Quicksburg/Forestville Ruritan Club. He is survived by two sons, Michael Neese and Daniel Neese; a sister, Ruth Ann Neese; two brothers, Chris Neese and Fred Neese and six grandchildren. At his request, Dick will be cremated, and a memorial service will be held at a later date in 2021. It is requested that contributions in Dick’s memory be made to the Quicksburg/Forestville Ruritan Club, c/o Tony Dean, 2711 Pinewoods Road Quicksburg, Virginia 22847. Friends may sign the register book on Friday, Saturday, and Sunday from 10 a.m. to 6 p.m. at the Theis Chapel of Dellinger Funeral Homes in New Market.

John Richard &#8220;Dick&#8221; Neese, 71, of New Market, and longtime Shenandoah County Supervisor passed away Saturday morning, November 28, 2020. He was born June 10, 1949 at the Henkel Maternity Hospital in New Market and was the son of... View Obituary & Service Information

The family of John "Dick" Richard Neese created this Life Tributes page to make it easy to share your memories.

Send flowers to the Neese family.