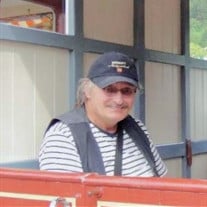 Roy Marc Robertson, age 69, of Mount Jackson, VA passed away Friday, August 23, 2019 at his home. He was born September 24, 1949 in Albion, NY and was the son of the late Leon “Mark” and Maejel Robertson. His childhood years were spent in Clarendon, NY, where he developed his love for wildlife and the outdoors. Roy had been employed as a metal plater at Eastman Kodak in Rochester, NY. He moved from Brockport, NY to Mount Jackson, VA ten years ago where he lived out his dream retirement in the mountains, spending his days woodworking, birdwatching, and entertaining those around him with his quick wit. Roy's proudest achievement was his children and he enjoyed trips to France and Switzerland to visit his eldest daughter and grandson, he shared his lifetime knowledge of craftsmanship while completing renovation projects with his son, and he was eagerly awaiting the September arrival of his youngest daughter’s first child. He is survived by his loving soulmate Marjorie Robertson; children, Jessica (Darren Talbot) Robertson-Talbot, Justin (Molika Sovann) Robertson, and Heather (Kyle Reis) Robertson; his grandson Zack Talbot; his sisters Susan Persia, Anne Piedmont, and Rosemary Catlin; many nieces and nephews; his beloved cat, Shag, and three grand-dogs. A remembrance service will be held in his home state of New York during 2020 at Disciples United Methodist Church in Holley, NY, and will be followed by celebrations of Roy at his favorite places. In lieu of flowers, donations may be made to your local animal shelter.

The family of Roy Marc Robertson created this Life Tributes page to make it easy to share your memories.

Send flowers to the Robertson family.