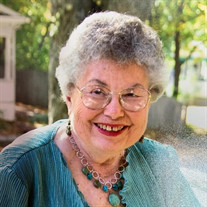 Sylvia Lane Sheaks Moore, after a long and fulfilling life, passed away peacefully at the Brunk House at the Virginia Mennonite Retirement Community (VMRC) in Harrisonburg on Wednesday, September 30. Sylvia was the daughter of Earl Leroy Sheaks... View Obituary & Service Information

The family of Sylvia Lane Sheaks Moore created this Life Tributes page to make it easy to share your memories.

Send flowers to the Moore family.