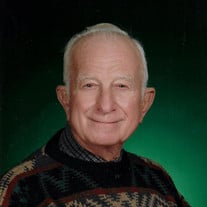 Thomas Earle Foltz, 93, of New Market, passed away on Saturday, Dec. 12, 2020 at Sentara RMH Medical Center where he had been a patient for five days. He was born on February 5, 1927 in Tenth Legion, VA to Emmett Eugene Foltz and Rena Kathleen Thomas Foltz. He was the youngest of five children. Tommy grew up in Tenth Legion and graduated from Broadway High School in 1944. After graduation, he served two years in the United States Army stationed in Panama. He married Doris White on June 30, 1948 who preceded him in death on July 4, 2012. Tommy held many jobs in his life including driving a school bus, raising turkeys, working for Moyers Motor Company, J. Wesley Poland Construction and Shen-Valley Homes. In 1977, he began his own contracting and remodeling business, Heritage Builders of Virginia from which he retired in 2005. Tommy was a member of Manor Memorial United Methodist Church where he served as Lay Leader at one point and was a member of the United Methodist Men’s. In his earlier years, Tommy was a volunteer fire fighter for the New Market Fire Department, also served as PTA President and was a member of The Gideons International Organization, as well as a charter member of the New Market Lions Club. In his spare time he repaired clocks, watches and jewelry. Tommy enjoyed construction work, his church and helping others. Tommy is survived by two children, Teresa Green and her husband, Matthew of New Market, and Bruce Foltz and his wife Carmen of San Diego, Ca. three grandchildren, Eric and Lindsey Green and Benjamin Foltz, and three step grandchildren Javier, Joel, and Carolina Jauregui. In addition to his parents, Tommy is preceded in death by three sisters, Rosalie Sellers, Frances Foltz, and Marjorie Whitmore, and one brother Clark Foltz. A graveside service will be held at Emmanuel Lutheran Church Cemetery, in New Market on Tuesday, Dec. 15, 2020 at 2:00pm. Reverend Stephen Creech will preside at the service. Everyone is asked to wear a face covering. The casket will be closed, however friends may sign the register book at Theis Chapel of Dellinger Funeral Home in New Market. In lieu of flowers, donations may be made to Manor Memorial United Methodist Church, 9320 N. Congress St., New Market, VA 22844.

Thomas Earle Foltz, 93, of New Market, passed away on Saturday, Dec. 12, 2020 at Sentara RMH Medical Center where he had been a patient for five days. He was born on February 5, 1927 in Tenth Legion, VA to Emmett Eugene Foltz and Rena Kathleen... View Obituary & Service Information

The family of Thomas Earle Foltz created this Life Tributes page to make it easy to share your memories.

Thomas Earle Foltz, 93, of New Market, passed away on Saturday,...

Send flowers to the Foltz family.